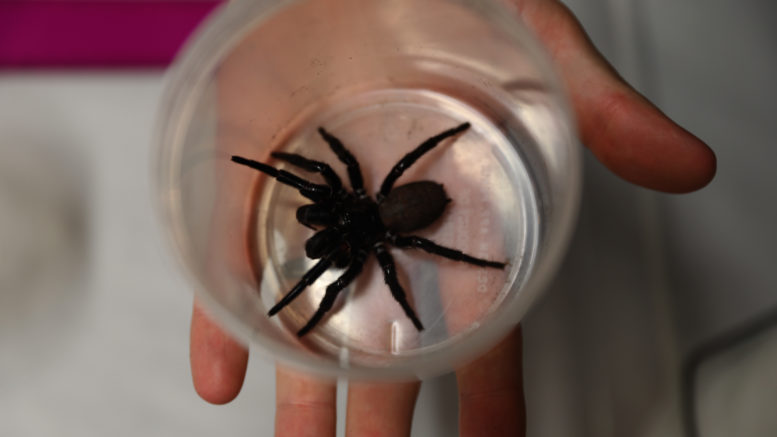 Due to the recent wet and humid weather, funnel web spiders have been thriving, and the Australian Reptile Park is encouraging members of the community to safely catch them for its antivenom program.

Spiders that have been handed in participate in the lifesaving milking program.

The venom is milked by staff and turned into antivenom which saves up to 300 lives per year.

The Australian Reptile Park is the only facility in Australia that milks funnel web spiders for their raw venom to be made into lifesaving antivenom.

This week the Australian Reptile Park received the biggest funnel web spider it has ever had donated
to the program.

Keepers have dubbed it Megaspider.

Measuring in at eight centimetres with fangs that are almost two centimetres in length, this sizeable spider could bite through a human fingernail.

For perspective, the average size for a funnel web spider is between one to five centimetres.

The spider arrived at the Australian Reptile Park as part of the weekly collection from all the drop off points around Sydney, the Central Coast and Newcastle.

It was in a Tupperware container without any labels to signify where it came from.

Keepers are eager to find out the area in which it came from with hopes of finding more of the large spiders as they produce larger amounts of venom for the antivenom program.

“In my 30 plus years at the Park, I have never seen a funnel web spider this big,” he said.

“She is unusually large and if we can get the public to hand in more spiders like her, it will only result in more lives being saved due to the huge amount of venom they can produce.

“We are really keen to find out where she came from in hopes to find more massive spiders like her.

“People can bring any collected spiders to the Reptile Park itself.

“However, if they can’t get to us, we have drop off zones around Sydney, the Central Coast and Newcastle and all facilities are provided with a spider safety kit to house the spiders until the Australian Reptile Park staff can come and pick them up each week,” Tate said.

The funnel web spiders are milked weekly for their raw venom that is sent off to Seqirus in Melbourne to be made into lifesaving antivenom.

The Park is also the sole supplier of terrestrial snake venom to make into antivenom.

The venom program is estimated to save up to 300 Australian lives per year and over 25,000 lives in total since it started in the 1950’s.

The Australian Reptile Park website features a safety and capture video online taking viewers through a step-by-step process in collection and delivery of a funnel web spiders.

Drop off points on the Central Coast include the Australian Reptile Park, Gosford Hospital, Wyong Hospital and Wyoming Veterinary Hospital.

Setting aside our differences

‘My favourite part of the day’

Be the first to comment on "More mega spiders needed"