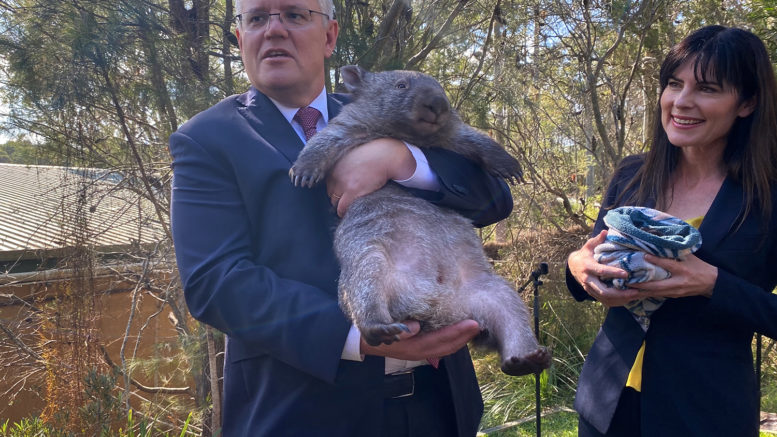 Scott Morrison is heading off to COP26 in Glasgow with his carry-on stuffed with copies of his 129 page ‘Plan’ for achieving net-zero emissions by 2050.

Inspired by Mr Morrison’s seemingly unwavering ability to avoid actual accountability we will no doubt see the various Members of the Liberal Party fall in behind his Teflon Smirk (TM) and join their voices to the chorus of “Who do you trust to deliver on our Plan”?

For the benefit of any such party Members who read these pages I offer these thoughts:

Nobody should trust you.

The ashes of our trust rose into the skies along with the smoke of the 2019 bushfire season and the embers from the pyre of cheerful Prime Ministerial Hawaiian shirts.

Those ashes were then flushed down the toilet by the tears of loss, fear, and frustration that we shed as we watched the Morrison government’s train wreck approach to COVID19 vaccine acquisition, vaccination of the aged-care sector (yes, despite all your obfuscation we remember that aged-care is a federally governed sector), and finger pointing and party politics played with State leaders.

All that before I even mention the unashamed lies told during previous election cycles; $100 lamb dinners, Labor’s “Death Tax” and “War on the weekend”, the impending death of Whyalla, and let’s not forget the financial shenanigans and pig-trough voter buying of Sports Rorts and the magical Commuter Carpark funding promises.

I wouldn’t trust you to make me a cup of tea let alone make and carry through on a Plan for dealing with climate change.

Which brings me to this so-called plan.

It is nothing of the sort; it is spin.

Here’s exactly how Morrison and his Government turned a plan into spin.

Firstly, they again kicked the ‘P’ (for ‘Problem’) down the road a few more years hoping that they can get through next year’s election without too many people realising that they have (again) been sold a pack of BS, so the ‘P’ became an ‘S’.

Then they hoped that the electorate has (‘L’ for) ‘Learned’ nothing from the disgraceful behaviour the Liberal party has demonstrated over the last decade around Climate Policy and instead will yet again be fooled by a (‘P’ for) ‘Pithy’ three-word slogan.

This time it is “Technology not taxes” – more on that howler later.

Then they swapped ‘A’ for ‘Action’ for ‘I’ for ‘Inaction’ and capped it all off by setting the nation on the path of again doing ‘N’ for ‘Nothing’.

It’s a 129-page pamphlet that’ll work about as well as a chocolate teapot.

Mr Morrison and his various party mouthpieces will hammer away on “Technology not Taxes” from now until next year’s election.

Here are the indisputable facts: $20B worth of government revenue (raised by taxes) is committed to the Morrison Government’s ‘technology’ strategy: $1B for research plus $3B for development, and $16B for pre-commercial deployment and commercialisation.

Oh, and even more but we don’t yet know how much more revenue (taxes) will pay for whatever the Nationals have been promised by Morrison as a bribe to having them fall (grudgingly) into line behind a Net-Zero-by-2050 pledge.

My taxes, your taxes are paying for the Morrison Government’s technology strategy, and to be clear the alternatives to this approach would be a market mechanism which would transfer those costs mostly on to polluters.

As opposed to a gigantic taxpayer-funded industry policy, which is what this (so-called) Plan actually is.

So, remember it is not a plan it is just more spin, your taxes are paying for the technology, and personally I wouldn’t trust the Morrison Government to deliver me a pizza on time.