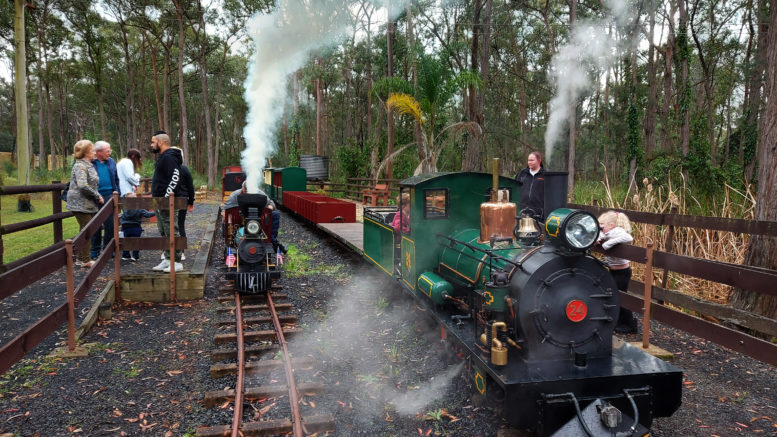 The former Smokey Mountain and Grizzly Flats Railroad has closed after five decades of providing a place for locomotive enthusiasts and tourists to enjoy the joys of steam trains.

The Railroad was first opened in 1967 by Arthur Birch at the Australian Reptile Park before being relocated to its current site on Mountain Rd in Halloran in 1975.

The ‘new’ site officially opened to tourists in 1977 and visitors could enjoy a ride along the four kilometres of track winding through the bush and wetlands at the site.

Former volunteer at the Smokey Mountain and Grizzly Flats Railroad, Ray McDonald, said the park saw tourists and enthusiasts from all walks of life visit before it was closed to the public in 1998.

During this period, the railroad saw 450,000 people travel on the railway.

“All we really had at the site was the trains and a picnic area.

“It was really for train enthusiasts as it is the only site with a 12-inch gauge.

“I started as a volunteer in 1997 where I started out cleaning and firing the engines, and eventually I ended up driving them.

“One of my favourite memories of the railroad was when I purchased one of the locomotives.

“I’ve been a train enthusiast since I was seven years old, so it was quite special to me when I had the opportunity to buy one of the trains,” McDonald said.

The railroad was closed in 1998 due to Council re-zoning the site, requiring the railroad to apply for a new development application to continue operating which McDonald said would have costed over $1M.

The closure was also a result of the inflated cost of public liability insurance after an incident that year.

Since then, the railroad has been operating a few days a year for family and friends.

“Before COVID, we were having three to four running days for family and friends, and on these days we would run the trains around the track from 9am to 5pm.

“The public were never directly invited to these days, but friends who were invited were always welcome to invite their friends.

“They were pretty fun days and I’m not sure how more people didn’t hear about it as the trains certainly made a lot of noise.

“Apparently you could hear the whistle of the train from Warnervale Station,” McDonald said.

The last trains were run on October 8.

Today, the railroad is facing the bulldozer, as the site is being re-developed into an industrial park.

McDonald says the trains currently at the site will most likely be moved into storage, as there are no suitable places in NSW for the trains to be relocated.

While it may be the end of the line for the Smoky Mountain and Grizzly Flats Railroad, its legacy will live on YouTube, where the channel Warnervale Steam Railway features all kinds of videos on the railroad including slideshows of old photos and point of view ride-alongs.

Prime Minister comes out against an extension of PEP11

State to pay for private wetland clean up