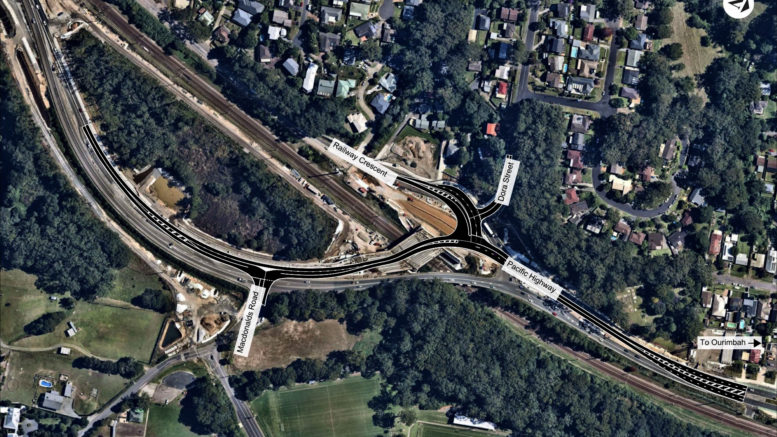 A map showing the planned duplication work at Lisarow

Traffic is flowing across the first lanes of the new rail bridge at Lisarow as the $178M duplication of the Pacific Hwy between Ourimbah St and Parsons Rd powers ahead.

One lane in each direction of the four-lane bridge opened to traffic this week.

Parliamentary Secretary for the Central Coast and Member for Terrigal, Adam Crouch, said the new rail bridge and adjacent approaches would replace the existing narrow and often congested bridge near Railway Cres.

“The first half of the new bridge is supported by 27 concrete girders locally manufactured in Newcastle, which are 35 metres long and weigh between 65 and 70 tonnes each,” Crouch said.

“The bridge itself contains 150 tonnes of steel, while 430 cubic metres of concrete has been used for the bridge deck.”

Motorists can now drive on a section of new road from the roundabout at Parsons Rd up to Ourimbah St.

Work is also continuing on upgrading The Ridgeway intersection to include traffic lights.

The completed project will also feature traffic lights at the Railway Cres and Macdonalds Rd intersections, and improved access to parking at Lisarow railway station.

The next major stage of the project involves demolishing the old bridge in March 2022 in order to build the second half of the new bridge.

Deputy Premier and Minister for Regional Transport and Roads, Paul Toole, said the NSW Government-funded project will improve traffic flow, travel times and safety on the 1.6km section of highway.

“Providing two lanes in each direction on this stretch of the highway will be a game changer for the 30,000 motorists who use this road each day,” Toole said.

“We started this upgrade in February 2019 (and the) upgrade has provided work for about 1,400 people so far, including more than 150 different suppliers and contractors, putting money into the local economy at a time when it’s needed most.”

The $178M project is expected to be completed in 2023, weather permitting.

For more information, go to: nswroads.work/lisarow.