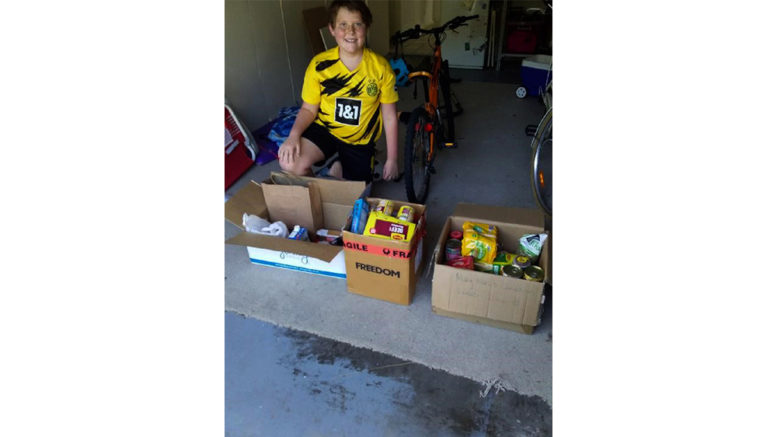 A Woy Woy student has completed a donation drive to help support those in need, collecting groceries and supplies to deliver to Mary Mac’s Place.

Callum Conroy, aged 11, said he wanted to help out the Woy Woy-based charity after witnessing his older sister’s support for the charity four years prior.

Callum’s parents, Shannon and Brett, said they were very proud of their son’s commitment to the community.

“The only thing he could think of was doing a letterbox drop to neighbours and asking if they could donate,” Shannon and Brett said.

“Neighbours placed their supplies on our veranda, and then we took them down to Mary Mac’s.

“He ended up with three boxes of groceries… we had a great response, it’s probably more than he expected.

“It didn’t just stop after the first day, it ran for about three weeks until the end of lockdown.

“We had people knocking on the door asking how they could donate, we got to meet neighbours we didn’t even know we had.

“It really brought the community together … we want to say a big thanks to all our neighbours who contributed.

“We’re proud of [Callum] – it’s good that he’s now got a sense of what’s going on in the community, that not all people are as lucky to have what he has, a roof over their heads, food on the table … and that every now and again, people need a bit of extra help.”

Mary Mac’s Place said they were appreciative of the hard work Callum had put into the drive.

“Mary Mac’s Place is open to anyone who is homeless, transient or needing a helping hand,” Sabian said.

“We provide meals, a place to wash clothes and to shower and access to outreach services like Legal Aid, housing and health supports.

“The people who visit Mary Mac’s have many faces.

“These faces include homeless people, couch surfers, train sleepers, rough sleepers, and people sleeping in cars or residing with family or friends in overcrowded situations.

“They’re seeing more women and children who are escaping domestic violence and sleeping in their cars because it’s not safe at home.

“They have families where the main income earner has fallen ill, needing surgery or treatment and cannot afford rent and food and pensioners that lose a partner and now cannot afford rent, food or bills on a single pension and people who simply cannot afford the rising cost of rent.

“People also come simply to have a chat and for the friendship opportunities as they are lonely or isolated.”

Mary Mac’s Place is currently aiming to raise funds to cover the costs of the meals they provide.

You can ‘Shout a Mate a $6 Plate’ by visiting: www.shoutamateaplate.org.au.

All donations are tax deductible.