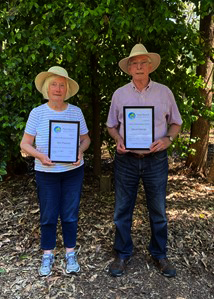 Two locals were crowned Life Members of the Pearl Beach Arboretum last week in recognition of their dedication to the community and local environment.

Ann Parsons and David George were presented with the awards by Arboretum President, Victoria Crawford, at the Arboretum’s AGM on October 17.

Parsons joined the Arboretum in 2009 and soon took up a management position on the committee, before becoming Secretary in 2015.

She remained in the post until September 2019 when she then took on the position of Vice-President – a position she still holds.

As soon as Parsons joined the committee, she set about researching the plants in the Arboretum and increasing her knowledge – particularly local threatened species.

“Ann has worked extensively with Robert Payne to maintain the spreadsheet of plants and their location,” Arboretum secretary, Mary Knaggs, said.

“One of Ann’s early achievements was the establishment of the flowering shrub area which is a haven for small birds.

“More recently Ann has been instrumental in obtaining a grant from the Commonwealth Government to initiate research into the feasibility of re-introducing koalas into the Pearl Beach Area – a project that is still ongoing with other stakeholders – including the University of Sydney and Central Coast Council and National Parks and Wildlife Service.

“The grant also allowed the Arboretum to provide habitat support for both koalas and native bees.

“Throughout her involvement with the Arboretum Ann has participated enthusiastically in working bees, arranged guest speakers, managed anniversary functions, encouraged others to join and promoted the Arboretum through the web and on facebook.”

Fellow honorary life member, David George, joined the Arboretum in 2001 and became treasurer from 2002 until 2005.

He re-joined the committee in 2010 for a short two-year stint.

“David’s greatest achievement whilst on the committee was coordinating volunteers known as the ABC (Arbo Boys Club) who met Tuesdays and Thursdays every week to help establish the Wildlife Corridor followed by a cuppa and a chat,” Knaggs said.

“David was the leader of this group for six years [and] was on the wildlife corridor funding and fundraising subcommittee.

“He purchased plants for the wildlife corridor which were recorded in the daybook by name, quantity and location planted making it easy to create a plant database. “Although David has retired from the committee, he still maintains an interest in the Arboretum.”