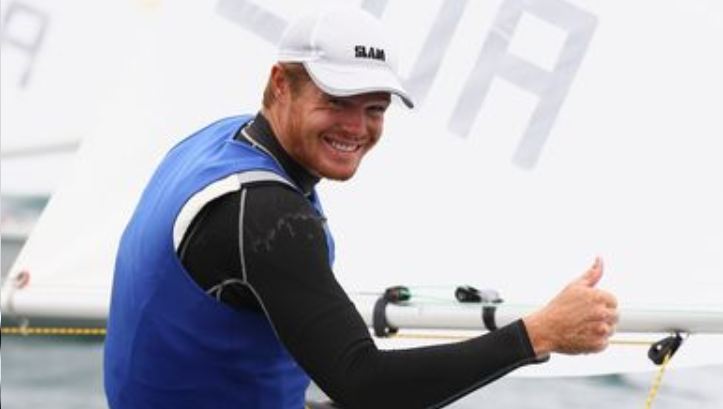 Australian competitors performed well at the six day event, from September 2 to 7, especially those from the Newcastle-Central Coast shoreline.

Alongside Slingsby, Olympic sailor from Newcastle, Iain Jensen and Lake Macquarie’s Kyle Langford dominated the top end of the leader board, in the end finishing first, second and fourth.

Slingsby proved himself champion after winning 13 out of 14 races, dropping to second place once.

Slingsby led the yellow group with a faultless streak of six wins, whilst Jensen led the blue group with five wins and one fourth place.

After taking Saturday for a rest, the sailors returned the following day for three days of finals racing, split into a Gold and Silver fleet.

In the first Gold final, Slingsby experienced his one and only slip, finishing in second place behind Langford.

By the end of the day, the three Australians led the competition, with Britain’s Paul Goodison slipping behind them after a mast-breaking crash with Italy’s Francesco Bianchi.

Slingsby returned to winning ways on Finals Day Two and was undeterred through to the end.

Despite a shift in wind conditions on the final day, Slingsby secured the title with two races to spare.

Jensen finished behind him in second, with Goodison re-emerging late to clinch third place from Langford.

“It’s been amazing for me and honestly, it’s probably the best regatta I think I’ve ever sailed,” reported Slingsby at the Championship’s conclusion.

“It was a bit unsure whether it would happen with COVID this year, but I’m just really happy I was able to defend my World Title.

“And to do it in Australia and now in my second home, Lake Garda, somewhere where I have spent so much time over the years, with this quality fleet, I am just sort of over the moon.

“I sailed really well, I had good boat speed, the boat held together, and the results came my way.”

Slingsby’s result was well received by his home club in Gosford, who on occasion benefit from Tom’s teachings on the new techniques and technologies in the sport.

“It was a magnificent performance… his overall approach to the regatta was brilliant,” said Gosford Sailing Club’s Sailing and Marina Manager, Peter Walsh.

“In the heavier breezes, where a lot of people might struggle a bit, Tom has got amazing boat handling skills and seems to naturally be one with the boat.

“I think Tom still has a connection to the club and he is an inspiration to our juniors.

“When he gets a chance, he‘s back here and he certainly engages them and puts a bit of time in.

“Last time was when we had the Sail Grand Prix here; we had a special afternoon where he was mentoring kids about foiling.”

In fact, only four days after the completion of the Championships, Slingsby and Langford competed for Australia and Jensen for Britain in the fifth instalment of the Sail Grand Prix (SGP) Season Two, held off the coast of Saint-Tropez, Southern France.

In this national, team-based race series with wing-sailed catamarans, it was an unfortunate eighth and last place finish for the Aussies, with Britain coming in sixth after being penalised due to making contact with another boat.

This result has seen the Australian defending champions drop down to third place in the series, with France SGP winners, Japan, taking the lead and the USA falling into second, Britain in fourth.