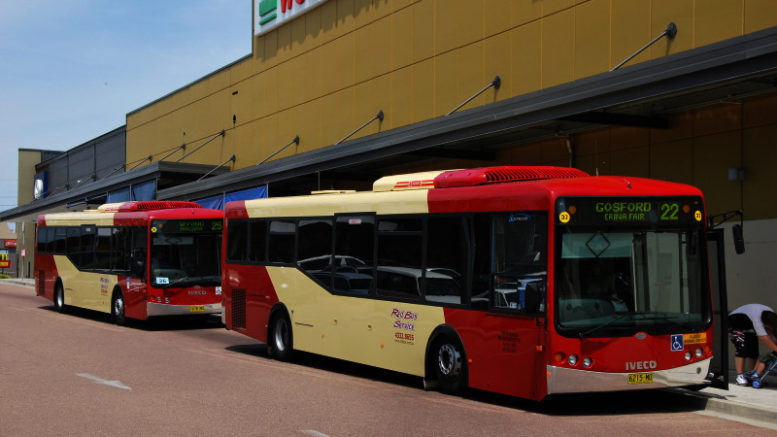 Bus drivers have banded together and launched a community petition to support the Central Coast’s iconic Red Bus Service, which Transport for NSW is putting out to open tender.

The drivers and other staff, led by David Malcolm who started the petition, are calling on the community to back them in “doing everything possible to stop the bus service from being stripped of its Region 7 contract”.

Transport for NSW (TfNSW) confirmed that the contract would go out to open tender.

It is understood the company and TfNSW could not come to an agreement during contract negotiations.

“Red buses have been operating for 81 years on the Central Coast and every seven years the contract comes up for renewal, due in 2023, but all of sudden, for the first time, it’s put out to open tender,” Malcolm said.

“That’s going to open it up for the multi-nationals to come in and take over … and we think that’s wrong.

“So, we (employees) are all standing together – and we hope the community is behind as well – to say no, back off, leave Red Bus alone and just renew their contract.

“This is not a management thing, they’re having their own battle with the government, this is the employees standing up for a company that has always had our backs, and now it’s time for us to stand up for them.”

A TfNSW spokesperson said they routinely tested and assessed the market to ensure the best possible transport service and value for customers was delivered.

“We are currently making preparations for market testing for Region 7 bus services which operate on the Central Coast,” the spokesperson said.

“Factors we are considering include customer comfort and safety, innovation skills, value and sustainability.

“All operators including existing service providers are invited and encouraged to be part of this process.

“We will work with the successful operator to support local jobs and reassure customers that service continuity will remain a priority.”

An announcement of the outcome of the tender process is expected in the first half of 2022.

Malcolm said community members could sign the online petition at change.org to show support and already the number of signatures was over the halfway mark of the 10,000 he hoped for.

There are four generations of family history behind the success of Red Bus Services, which is one of the oldest bus operators in Australia.

They started with only five buses when the family bought The Red Bus Company – Tuggerah Lakes Motor, which they renamed to The Entrance Red Bus Service.

In 1946, the family purchased a service running between Gosford and East Springfield and renamed it Gosford Bus Service.

The names of both businesses, Gosford Bus Service and The Entrance Red Bus Service, remained in use until the 1990s when both were rebranded as Red Bus Services and all operations were consolidated at the Bateau Bay depot.

In July 2006, Red Bus Services became the first private bus company outside of the Sydney metropolitan region to enter into a contract with the state government operating services across the Central Coast.

Now operating a fleet of 103 buses, Red Bus has always been a family concern, which is also reflected in the workforce of 160.

“There are third generations of people working here – one of the employees for 67 years, and it’s common for 10, 20, 30 years that people are working here,” Malcolm said.

Disaster relief organisation to expand to the Peninsula

Pacific Highway black spot to have a safety upgrade