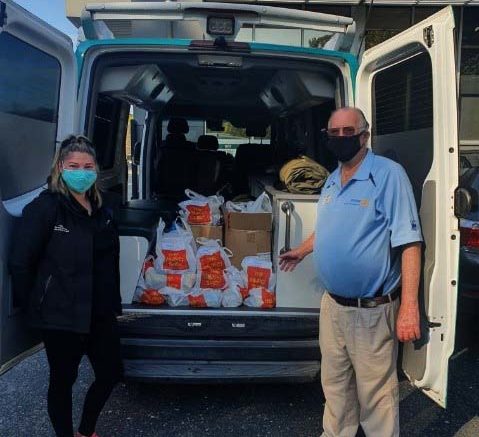 Don Cannings of The Entrance Rotary Club has been busy supplying 40 Random Acts of Kindness Bags to Coast and Country Primary Care (CCPC) in Erina on August 27 to support the health and wellbeing of homeless people.

The bags, which are being made for the Health on the Streets Team (HOTS), are packed with non-perishable food items such as baked beans and canned spaghetti as well as sweets and treats that do not require heating or cooking to feed those without a roof over their heads.

Cannings said that CCPC reached out to The Entrance Rotary Club in December 2020 asking for assistance in providing essential goods.

“We were contacted by CCPC who put us in contact with Joel Sneaton, who is a social worker with HOTS, to help by gathering items that could help homeless people on the Coast.

“We suggested that we get items that didn’t need heating and it made such a difference in the community.

“Sneaton was telling us after the first round of bags went out just before Christmas that, after people had received their bags, they were becoming more engaged with HOTS and going to their appointments, so he asked if we could keep providing bags in the future.

“We got a grant of $3,000 from Rotary Australia and The Entrance Rotary Club which will go towards making more bags.

“As well as the food, we also have supplied sleeping devices to keep people out of the weather and we also have donated mobile phones, as homeless people on the Coast move around a lot and they usually have no way to be contacted.

“Phones enable CCPC to book and follow up on appointments they may have booked.

“We also support other services that help homeless people on the Coast like Shoebox Revolution and the Benevolent Society, we try to help them where we can,” Cannings said.

The 40 bags dropped off to CCPC on August 27 was the third delivery The Entrance Rotary Club has made with more planned.

“The grant means that we should now be able to deliver these bags for at least the next 12 months.

“It often takes me a couple of days to get everything to put in the bags, and I’ve already started to put the next lot of bags together, but I won’t be making anymore until we get the call from CCPC and restrictions start to ease,” Cannings said.

The service breaks down barriers faced by homeless people such as a lack of transport and a lack of identification and ensures that everyone sleeping rough has access to basic healthcare, safety and dignity.

Much more can be done for the homeless