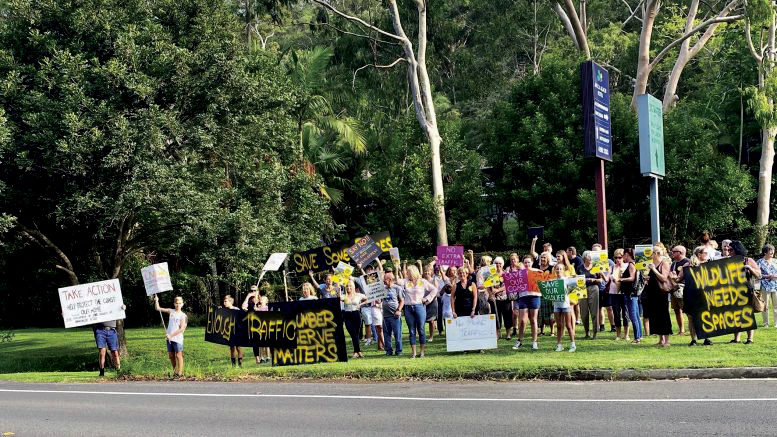 Residents protesting on site in February, 2020

Community groups are hoping that another refusal of Living Choice’s application to put a 165-site residential community on the former Bangaloe Stud site at Kincumber will see an end to attempts to develop the land.

The Central Coast Local Planning rejected an appeal against its refusal of the application last August at its most recent meeting on July 22, endorsing a Central Coast Council recommendation for refusal.

Kincumber and Picketts Valley Community Action Group (KPVCAG) said its members, along with those of other groups, were pleased at the outcome.

“Almost two years of hard and determined work and lobbying by residents, supported both by the Avoca Beach and Copacabana Community Associations, has seen common sense prevail and faith in the local planning instruments realized,” KPVCAG President, Graham Murray, said.

“It is so important that we can trust the characterisation of applicable zonings, in this case ‘E4 Environmental Living’, and the gatekeepers who protect us from what so often seems audacious money grabs by profit driven developers.

“After all, it is the character of a particular area which fundamentally attracts us to live here, holiday here and call it our ‘home’.

“This latest unanimous decision by the LPP would suggest that any future like-form proposal for the site would be extremely unlikely to succeed and goes a long way to setting important precedence to all E4 zoned lands across the Central Coast.

“The Council officers and staff have once again done a thorough and diligent job in their assessment of the development proposal and along with the whole supportive community are given a huge thank you.”

The application has had several hearings since it was first lodged in December 2019.

When community meetings failed to allay residents’ concerns, the developer scaled back the application from its original 202 manufactured on-site homes to 165 and made other amendments in the hope of seeing the DA finally approved.

The Panel however, was unanimous in once again rejecting the proposal after hearing from five representatives of community and environmental groups speaking against the project and ADW consultant, Chris Smith, and Living Choice Director, Ian Tregoning, speaking for the proposal.

The Panel found the proposal was: not properly characterised as a ‘caravan park’; was not consistent with the objectives of the E4 Environmental Living zone under the provisions of the Gosford Local Environmental Plan 2014; would result in significant cut and fill, earthworks and removal of vegetation on the site which would impact the ecological values, visual and scenic quality of the area; and was not suitable for the site.

The Panel also found insufficient information had been provided in relation to stormwater run-off and downstream flooding impacts, ecology, waste, soil and water management, emergency and construction access and tree retention and that the proposal was an overdevelopment of the site.

Living Choice Regional Manager, Gail Eyres, said Living Choice was disappointed with the Panel’s decision and was conferring with its town planning team to examine all options.

Local planning panel is a win for developers