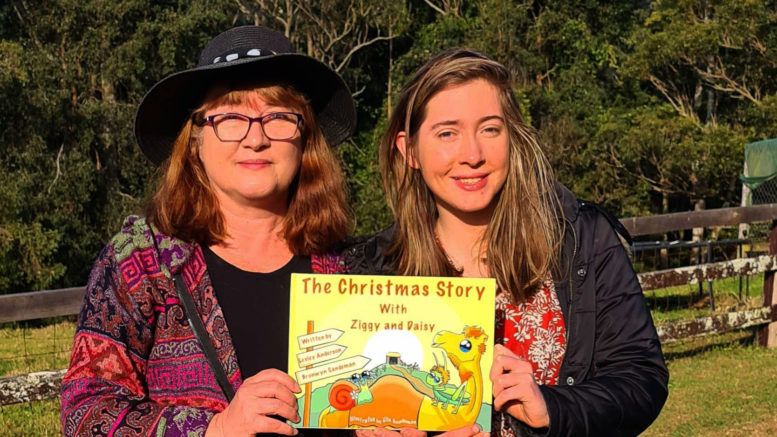 The Sandeman family are gearing up to release their book The Christmas Story with Daisy and Ziggy.

It started with a poem by Bronwyn Sandeman’s aunty Lesley Anderson, and some illustrations drawn up by her daughter Ella Sandenan three years ago, and now it has turned into a children’s book, telling the Christmas Story in a new way.

Not a stranger to books, Bronwyn who is the Librarian at MacKillop Catholic College in Warnervale said that the book is a family affair, joining her Aunt Lesley’s poems with her daughter’s illustrations with a story created by her.

“This book, Ella started three years ago and it’s about the biblical story of Christmas and my Aunty wrote poems to go with the pictures.

“We then expanded the story, and I created the characters Daisy and Ziggy.

“Every drawing took Ella about a day or two of experimenting.

“The book is interesting as it can be read two ways, one way it’s a collection of sophisticated poems, and the other way it’s a funny children’s book.

“I would say most of the people that end up buying it will buy it for a child, but adults will enjoy the poems.

“It was a lot of fun writing this, and I really enjoyed the experience.

“It was a nice challenge trying to fit the story with the pictures and the poems.

“Usually with the story of Christmas it only covers the birth of Jesus.

“With this book we have extended the story of Jesus until he was five, including things that are usually left out,” Sandeman said.

The Christmas Story with Daisy and Ziggy is being published by Balboa Press, and is set to be released in September in physical form and e-book form.

“We’re aiming to get it in bookstores in October.

“We will be enquiring about getting it in stores like QBD, Dymocks, Cornerstone and Bookface, and it will be available on Booktopia,” Sandeman said.

This isn’t the first book to be published for Ella Sandeman, as she previously drew the illustrations for Jack’s Magic Boots, By Sister Marea Ross, and she is currently working with Ross on a second book called Tina’s Purple Power, and a third book called Pete the Parrot.

Ella Sandeman has also submitted a piece in this year’s National Art Prize Competition with a piece called Serenity which is a finalist in the student category.