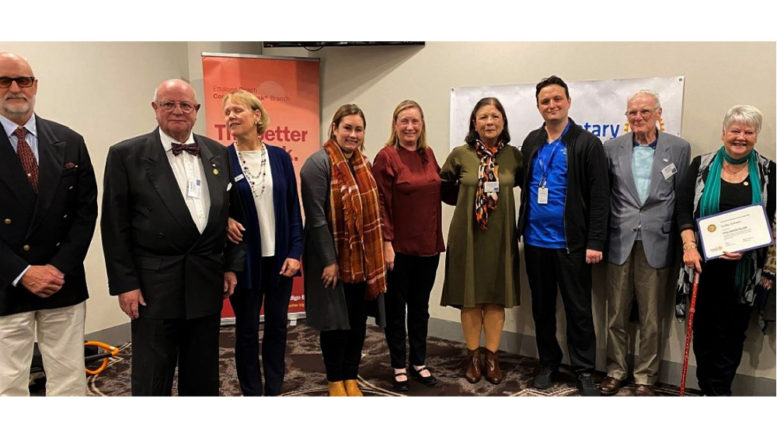 The evening was MCed by fellow Rotarian Martin King

A local store owner has been presented with a prestigious honour following his contribution to the local community during the COVID-19 pandemic.

The Award is Rotary’s highest honour and is named for Paul Percy Harris, who founded Rotary International in 1905.

Gordon said it was a ‘great honour’ to receive the award in recognition of his local volunteering work.

“I’m so grateful to Rotary for the award … it was totally unexpected,” Gordon said.

“It’s a great opportunity to be involved in Rotary and I would encourage everyone to get involved in any way they can.”

Gordon was largely honoured for his work during the COVID-19 pandemic after establishing Woy Woy Antiques & Collectables to assist not-for-profit organisations affected by the crises, with a percentage of profits going to a different local charity each month.

He also has a long history in volunteering for several other charities including the Henry Kendall Cottage Historical Museum, Coast Shelter, Fairhaven, RSPCA Central Coast and the Brisbane Water Historical Society.

The Rotary Club of Brisbane Water makes a $1,000 contribution from its own funds to the International Rotary organisation’s charitable foundation on behalf of each award recipient.

Gordon was one of four recipients of the Paul Harris Fellowships, along with Peter Downie from Coast Shelter and Rotarians Bobby Redman for her work with dementia education and support and Maggie Payne for her work at Pearl Beach’s Arboretum.

The Club also presented a $5,000 cheque to Coast Shelter and a $2,000 cheque to the Iris Foundation, which has programs aimed at reducing suicide amongst young people.

President of the Brisbane Water Club, Peter Mote, said the event was a ‘real success’.

“I would like to thank Cherie, Sue, Di, Maggie, Marylyn, Mitch, Jayne, Greta and Martyn in particular plus all of you who helped us make the event such a hit,” Mote said.

“Rotary has never been more needed than at any time in its 100 year history,” Mote added.

Mote’s comments come as his last as President of the Brisbane Water Club with his role soon to be filled by Cherie Simpson.

Mote said it had been a privilege to serve in the role.