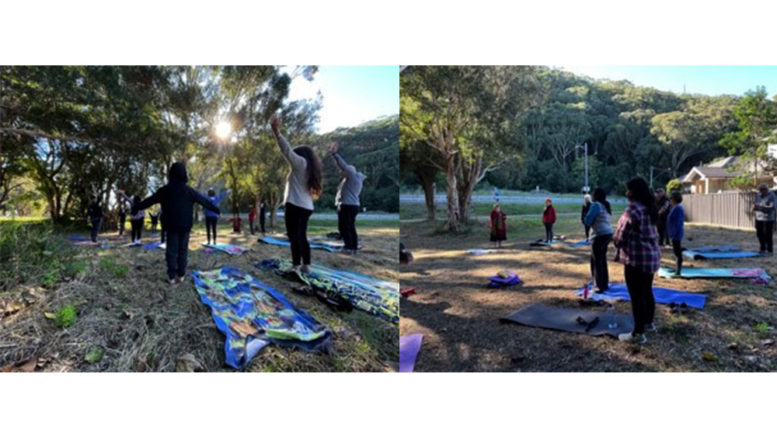 A local community group has ‘claimed’ a popular reserve on the Council’s list of tranche 3 assets for sale with a new event held on Sunday, June 6.

The ‘Hands off the Reserve’ group co-hosted the yoga class with Umina Beach Yoga at the reserve on Memorial Ave, Blackwall, in an effort to prove the asset is ‘anything but lazy’.

The comments come after former Council Administrator, Dick Persson, said the Council needed to raise funds through the sale of ‘surplus or lazy’ assets as part of its financial recovery plan.

Residents had until the end of May to voice their concerns and provide feedback on the proposed sell-off via Council’s Your Voice Our Coast website.

But the ‘Hands off the Reserve’ group have said it’s not enough, calling for more awareness on the issue through their new yoga program.

Local resident and yoga participant, Maryann Phillips, said she would be affected by Council’s proposed development of the site.

“The sunny weather was perfect for yoga under the paperbarks,” Phillips said.

“Apart from the loss of the trees, I am dreading the overcrowding and chaos that will result.

“We are living at the moment with the results of Council giving free rein to developers: insufficient parking leading to cars blocking laneway and abandoned in Warwick Street, incessant noise and rubbish everywhere.”

And local resident, Jane Hendy, agrees, suggesting the land risks being one of the ‘first victims of the Administrator’s frenzied sell-off’.

“In the past weeks, many people have visited Blackwall Reserve and found it a beautiful place, not just because of the trees (which are a remnant of the Umina Coastal Sandplain Woodland, an endangered ecological community), but also because of the ever-present bird life,” Hendy said.

“Blackwall Reserve is a source of life for the animals who live there and their trees, a source of harmony and peace for the people living nearby.”

With public submissions now closed on the list of sales, residents across the Coast now await to see which parcels of land will go on the chopping block.

Council said only land classified as operational and zoned for the correct purpose of sale will initially go back to Council for endorsement to sell, which includes Lots 23 and 23A at Memorial Ave.

Transition to Coastal Management Plan may leave us vulnerable

Hely Street to be Council Headquarters