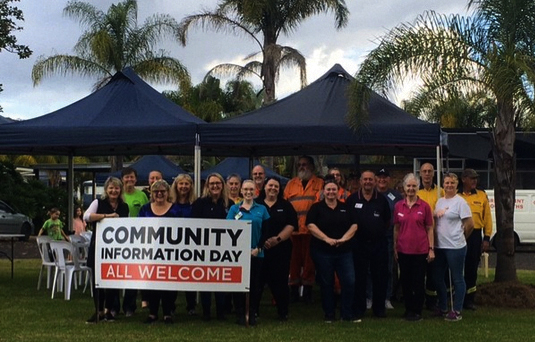 The community information day on May 1

The small riverside community of Spencer is tired of being left high and dry whenever a natural disaster occurs and is agitating for Federal, State and Local Government help in setting up a staging area and evacuation centre for the area.

Residents have been devastated by bushfires and floods over recent years, with heavy rains in March this year causing many residents to go without showers and hot meals for up to a week.

The River Cares community group, established in August last year, is determined to see more access to emergency services for the Lower Hawkesbury area, and held a community information day on May 1 to air its concerns.

“Whenever such a situation occurs we are left with no power, no landlines, no internet, no mobile coverage, no fresh water, no fuel for generators, and sometimes no food,” she said.

“We are completely cut off with no access in some instances to either Mangrove Mountain or Wisemans Ferry.”

Downham said the March flood event had seen some action from the Salvation Army, which distributed food hampers, and the SES, thanks to the efforts of Colin Lynch of the Department of Community and Justice, but that a more concerted response was essential.

“We never want to go through what we went through in March again,” she said.

“Many properties went underwater, the power went out and while some people had generators, there was no way to obtain more fuel for them.

“Traditionally, the Spencer RFS is the only organisation which has offered us help in such situations.

“We need support from all three tiers of government to ensure the area is equipped for future incidents and supported by emergency organisations so we can become more resilient.”

Downham said the community information day had been a resounding success, with around 25 representatives from community and emergency organisations offering support and around 60 residents in attendance.

“The support and information on financial assistance, mental health counselling, home care services and preparing your property for natural disasters was invaluable and they listened to the problems that the residents encountered not only during the floods but throughout COVID and the previous bushfires,” Downham said.

But the immediate need, she said, was for an evacuation centre.

“Our community hall is not in a suitable position for this purpose,” she said,

“We need a staging area and evacuation centre right on the river and we are calling on all tiers of government to provide the finances necessary to achieve this.”