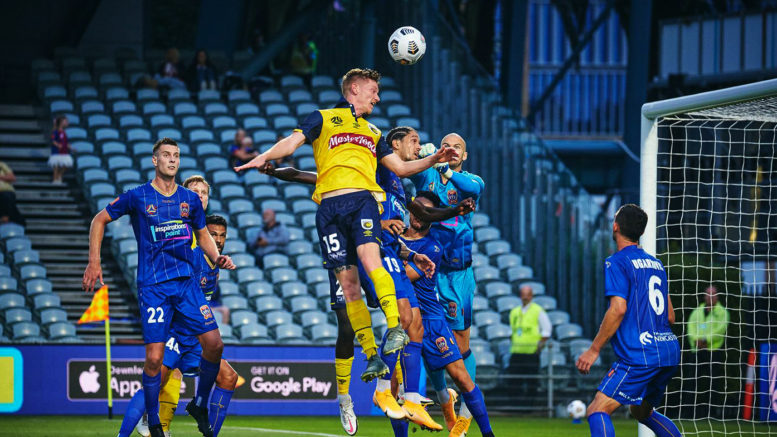 The Central Coast Mariners have found their first win in seven games against their F3 derby rivals, the Newcastle Jets, at McDonald Stadium on Saturday evening, May 15.

After a mid-week match against Brisbane Roar where they earned their first clean sheet in ten matches, the Mariners return to form continued with another clean sheet and a single goal to Matt Simon to see the boys in yellow defeat the hapless Jets.

An early chance was presented to the Jets from a mistimed header by Kye Rowles, but Jason Hoffman’s initial strike found Mariners keeper, Mark Birighitti in the way before a second shot from Angus Thurgate was deflected by defender Ruon Tongyik.

A third attempt from the ensuing corner by Nigel Boogaard was also thwarted as his header skimmed wide past of the post.

The momentum stayed with the Jets for most of the opening 20 minutes with the Mariners succumbing to the pressure conceding several fouls and giving to the Jets multiple chances to attack.

But the home side were unable to make the most of them, and throughout the second quarter, the Mariners were able to find more possession and control in the midfield space.

In the second half, the Mariners found more energy, with Joshua Nisbet posting a shot on target within the first 60 seconds.

Eventually, a questionable foul on Daniel Bouman in the box, one which somehow survived the VAR review, gave away the most crucial set piece of the game.

The Mariners leading goalscorer, Matt Simon, stepped up and non-chalantly drove the ball hard and low into the back left corner giving Jets keeper, Italiano, no chance.

The trademark shakas from the Mariners’ skipped roused the large cohort of fans who made their way up the F3.

Jet’s maestro, Roy O’Donovan, came close to an equaliser in the 59th minute with a shot curling under the top crossbar forcing the dive save from Birighitti.

Another chance for the Jets came in the 87th minute via a lobbed through ball by Ramy Najjarine for Valentino Yuel to chase.

The ball trickled forward dangerously to the edge of the penalty area, forcing Birighitti out of the box to cut down Yuel’s space and forcing the youngster into an errant shot.

While the three points was critical for the Mariners, and leaves them sitting tentatively in second place on the ladder, the blue and yellow will need to find more penetration up front if they are to seriously challenge for glory in the finals.

And there will be no better chance to find then in their next first-versus-second showdown with runaway competition leaders, Melbourne City (away) on Saturday, May 22.

Bring it on: Crunch time for Mariners