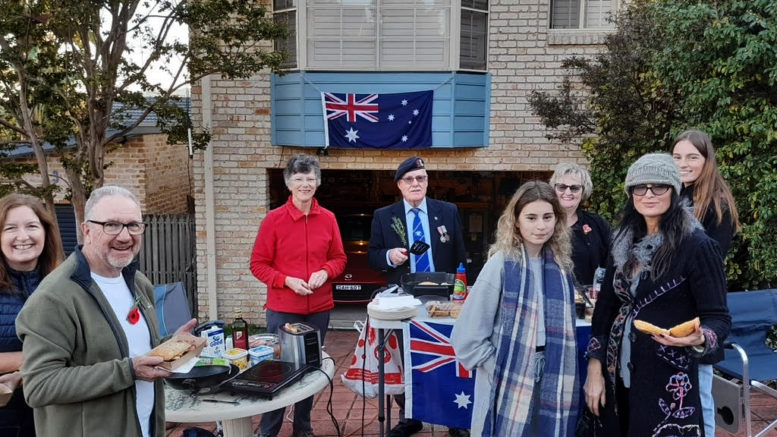 Although many Coast residents opted to return to organised major services on ANZAC Day this year, one small community at Green Point so enjoyed last year’s intimate atmosphere under COVID-19 restrictions and opted to do something similar this year.

Residents of Merindah Ave approached Penny and Brian Giersch to organise a small service held in the quiet cul-de-sac of 15 houses.

“It was so good to get to know our neighbours better than just ‘the wave’ as we drive past,” Penny Giersch said.

“Adding to the intimate atmosphere, many letterboxes were decorated with candles, poppies, the flag and even a slouch hat!

“We are lucky to have talented musicians, singers and speakers in our short cul-de-sac, so this year we even added a performance from our own ‘Vera Lynne’ and backing vocalist, singing We’ll Meet Again.

“After sharing a gunfire breakfast, we caught some shut-eye, before reconvening to play an hilarious game of Two-Up and billy-cart races, followed by an afternoon tea of Anzac biscuits and coffee.

“Only the sudden drop in temperature broke up the party.”

Resident Sally Trethewy said her family had been incredibly moved by last year’s Light up the Dawn initiative to honour ANZAC Day.

“Our neighbour Brian, a National Service Vet, was instrumental in creating such a lovely service for our street, including many of the children and teenagers of the various households to participate,” she said.

“We were thrilled Brian and his wife, Penny, were keen to conduct the service again.

“We love the sense of community it fosters and giving our children an opportunity to use their skills and talents to honour and remember those who have served in years past.

“We thoroughly enjoyed being involved again and spending time with our neighbours on such a significant day for Australia.”

Highlights of the service included The Last Post, played on trumpet by Meg Trethewy, an address by veteran Brian Giersch, an ode by Will Trethewy, a prayer for the fallen and a rendition of We’ll Meet Again by Layla Bedford.

All musical support for the service was provided by members of the Trethewy family.