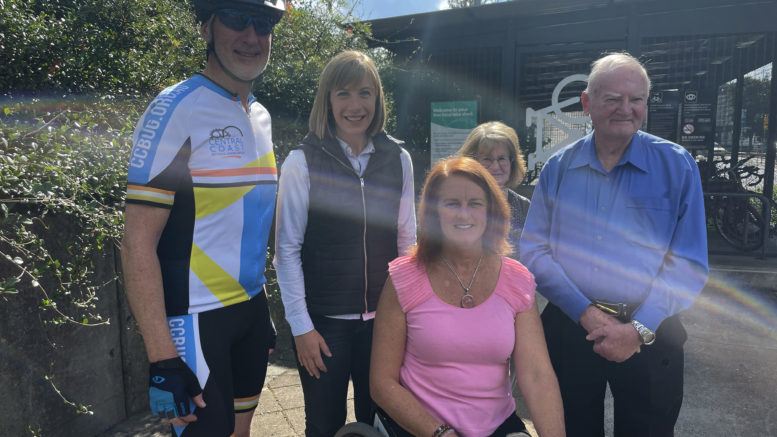 As more commuters return to the Central Coast railway system following the easing of COVID-19 restrictions, Member for Gosford, Liesl Tesch is calling for more bike and scooter infrastructure across the region.

“Bicycle and scooter users are struggling to find spaces to safely store their devices at train stations across the Central Coast,” Tesch said.

“Currently Koolewong and Tascott stations have no bicycle sheds or lockers; there are only four lockers at Point Clare station and only six lockers at Narara station, while Gosford station has only eight secure lockers and 38 shed spaces.

“Woy Woy Station has 51 shed spaces and 20 lockers, with only four currently available.””

Ms Tesch says the lack of storage infrastructure is forcing more people into their cars because cycling to the station is “simply not feasible or practical”.

“The State Government has spent money forming the shared pathways to enable people to cycle or use their scooters safely and practically, yet they have failed to provide the infrastructure to actually put this scheme into practice,” she said.

“Plans need to be (made) and followed through at every intersection so we can actually put the infrastructure to good use.

“We need more end of trip facilities like bike stations and shared pathways to encourage members of our community to ride more and choose more active forms of transport” Corven said.

“These facilities are important (as is) more parking at our stations to support the infrastructure needs of our community,” Ellis said.

Shadow Minister Haylen said while the Premier was encouraging families to ride to and from work, or their local train station, her own Government was failing to put up the money that is required to make this happen.

“If the Government is serious about encouraging people to walk or ride, they need to build the bike sheds and lockers this community is crying out for,” Haylen said.

“Building this infrastructure won’t just make it easier to ride to and from stations; it’ll also create local jobs at a time when they are most needed.”

Tesch and Haylen have written to the appropriate Minister asking for the infrastructure to be put in place.

For more information on how you can obtain a bike locker or for updated bike space information see https://appln.transport.nsw.gov.au/bikelockers/faces/jsp/public/home.xhtml.

Not all bikes can be reinvigorated

Important needs in our local community overlooked in Budget