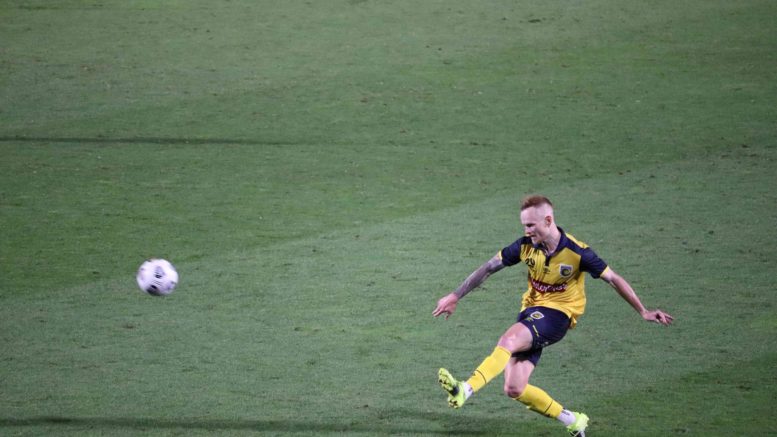 For the Central Coast Mariners, a 2 – 1 defeat over Macarther at Campbelltown Stadium has propped them back up to third place on the A League ladder with only two remaining home games left in the regular season.

Going into the game equal with Macarthur on 36 points, the win has put the boys in yellow into a very strong position to make the finals come season end.

There were early chances for the Mariners who continued from last week with strong pressure on goal, only so far lacking the on target shot to finish it off. In the 17th minute, the opening goal came up the other end of the pitch, put away by Markel Susaeta.

The Spanish midfielder’s run was spotted by Denis Genreau from Macarthur’s defensive half, who responded with a lofted through ball in over the Mariners defence. A foot race against Mariner centre back, Ruon Tongyik was won by Susaeta, who chipped the ball first time over the advancing Mark Birighitti in goal.

However, dissimilar from their previous match-day’s performance against Melbourne City, the Mariners were able to lift and take advantage of space that was beginning to present itself out wide in Macarthur’s defensive line. This culminated in a 31st minute equalising goal for the Mariners, scored by left back, Jack Clisby with his first touch, for his first goal of the season.

The move was started with a clever turn by Marcos Ureña who then drove forward in the middle of the pitch to condense the defence in around him. A quick pass found fellow frontman, Matt Simon, with his back to goal, who fed the ball to a fast approaching Clisby at the outside corner of the penalty area. The defender struck the ball hard and drove it low across goal to find the net by the far post.

This goal shifted the Mariners into a positive run of momentum whilst Macarthur were slow to react to the Mariner’s successful tactic of feeding the third attacking player out wide. Within minutes, a second chance came for Clisby in the same field position as before, yet with more time and space the goal scorer couldn’t add a second to his night’s count.

Another incisive run by Ureña started the move, coming before a deftly slid through ball gave to Clisby an open passage onto goal. This time round, the left back went for an outside foot placed shot aimed for the high inside post, but found the outside of the net.

Before half time, a third opportunity came for Clisby in this very same position. Resorting back to the powerful across goal shot and again benefitting from Ureña’s through ball, the left back once again drove the ball deep into the net. However, a VAR check found Ureña to have been offside when recieving the pass from Oliver Bozanic, so the score remained level at 1 – 1.

In the second half, the Mariners came out with a palpable desire to take the game by the horns. They were often faster to the ball in broken play, more clinical with their final passes and showed more hunger for the win. In the 55th minute, this led to another goal for Daniel De Silva, his first in 15 games.

Ureña was once again the assister for the goal after benefitting from an expertly executed lobbed through ball by Gianni Stensness. Turning his back to goal, Ureña tip-toed in-field before passing to De Silva, who first time side-footed the ball and watched it float lightly into the top corner.

With the lead established, the onus turned onto Macarthur to ask the necessary questions en route to an equaliser. Despite this, it took the hosts most of the second half to post their first shot at goal since the 25th minute.

Meanwhile, chances kept coming for the Mariners, the best being from a first-time hit, side-footed curler from Bozanic, outside the box, that forced the diving save from goalkeeper, Adam Federici.

In the end, the lead lasted for the travelling Mariners, who kept their first minute shape until a number of late substitutions in the final three minutes of regular time. The win has positively set up the Mariners ahead of their remaining two games of the season, both of which will be played at home.

The first of these will be another F3 derby match against the Newcastle Jets on Tuesday, June 1. Following this will be a quick turn around before their final season match against Western United on Saturday, June 5.

Building certification to be topic of local government conference