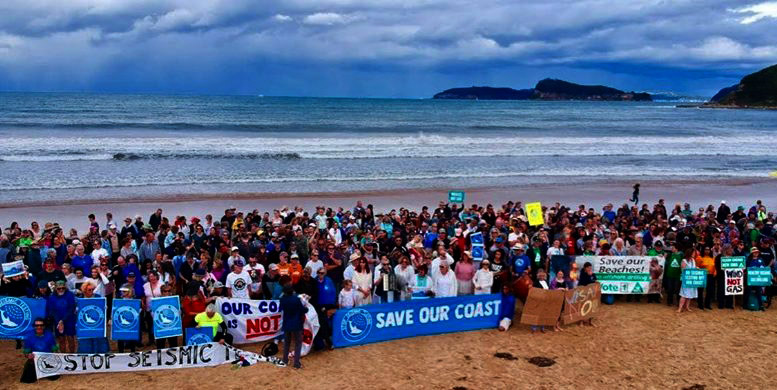 A rally at Umina Beach in 2019 attracted 1,800 residents opposed to off-shore drilling

Concerned Peninsula residents are expected to flock to Terrigal on Saturday, April 24, in support of a paddle-out to be held by Surfrider Foundation Australia as pressure mounts on Federal Minister for Resources, Keith Pitt, for a final decision on the renewal of the PEP11 permit for offshore gas and oil drilling.

Advent Energy’s PEP11 renewal application for the permit, which expired on February 12, would allow drilling off the coast from Port Stephens to Sydney for another two years, with fears the Peninsula would be a prime drilling site.

Deputy Premier, John Barilaro, recommended on February 17 that the licence not be renewed and Prime Minister, Scott Morrison, announced his opposition to renewing it on March 4.

Opposition Leader, Anthony Albanese visited Terrigal on February 5 to reinforce Labor’s opposition to renewal, chatting with representatives of Save Our Coast and the Surfrider Foundation and concerned residents.

All Central Coast MPs, both State and Federal, have also come out opposing the extension.

Member for Gosford, Liesl Tesch, has described Pitt’s failure to make a decision two months after the license expired “another disappointment”.

“Our waterways and marine life are the very heart of the Peninsula and the entire Central Coast and crucial to our economy,” Tesch said.

“Our natural assets and our unique environment must not be threatened by PEP11.”

Member for Terrigal, Adam Crouch, has also thrown his support behind the paddle-out on April 24.

“PEP-11 could have a devastating impact on our beaches and marine life, and I have been publicly opposing it for years,” Crouch said.

“The NSW Government is also formally opposed to PEP-11 but the final decision-making authority rests with the Federal Minister under the Offshore Petroleum and Greenhouse Gas Storage Act.

“Two months has passed since the NSW Government re-affirmed its opposition to PEP-11 and the Federal Minister has still not made a decision.

“I am urging the Federal Minister to listen to the concerns of the Central Coast community and say no to extending the PEP-11 permit.

“There is no place for oil and gas drilling off the Sydney, Central Coast and Newcastle coastline.

“Our beaches and marine life are too precious to put at risk.”

A statement from Federal Member for Robertson, Lucy Wicks, says she has been assured by the Minister that he will give this proposal the detailed consideration it deserves.

“The Prime Minister has said no to the extension of the PEP11 permit and I couldn’t agree with him more,” she said.

“My view on the PEP11 permit remains concrete, I will not support anything that could harm our waterways and precious marine life.

“I will be advocating for the Commonwealth to say no to the decision to extend the PEP11 permit.”

Save Our Coast has been opposing PEP11 for more than three years.

Founder, Dr Natasha Deen, said the group hoped that the Prime Minister would ensure Pitt “heeds the clear wishes of the community” and denies extension of the licence.

The organisation has held several mass rallies opposing the permit, with one at Umina Beach in 2019 attracting 1,800 residents, and 78,000 signatures have been collected on petitions presented to the government calling for the permit’s cancellation.

Members of Surfrider Foundation Australia have also been strong campaigners against the permit extension.

Saturday’s paddle-out will be held at 11am.