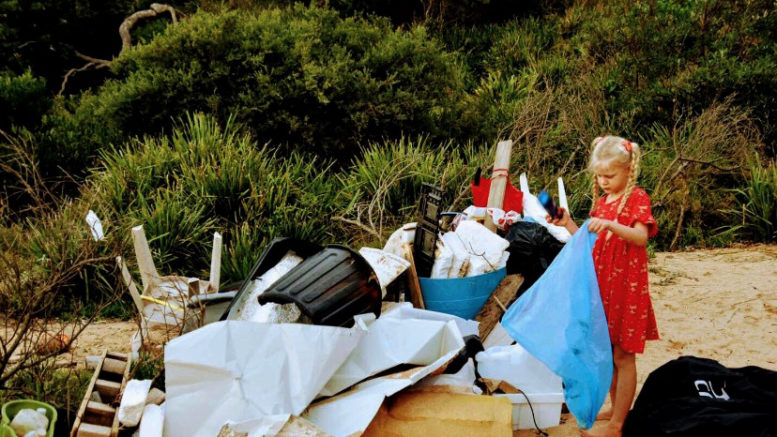 A small group of volunteers is calling for support from officials after spending hours picking up washed-up debris from Maitland Bay beach over the Easter long weekend.

After the recent heavy rain and weather conditions left much of the Coast with tonnes of debris on its foreshore, some people in the community have stepped up to help clean up the coast.

Local resident, Tammy de Ron-Cox, said she had initially put a call out to local community Facebook groups, but only six volunteers turned up.

“What upset me, and prompted me to take further action, was all the extra rubbish dumped [there],” Cox said.

“I went back the next Friday and it was so disturbing to see how much human litter had been left.

“A week of school holidays and the area is littered with food scraps and packages, plastic bottles and soft drink cans and paper plates (left) behind.

“We really need the attention of the park rangers and officials assigned to the dutiful care of our National Parks.”

Cox said the group was unable to remove larger items like torn iron sheets and timber from the beach and would therefore like to see infrastructure put in place to help.

“I witnessed children playing in the shores with one of these branches – [they were] much too large for any single person to remove,” Cox said.

“There is a danger to these kids who could easily get swept by a wave, knocked in the head and potentially drown.”

A council spokesperson said council has been managing the clean-up of seaweed, sea grass and other materials from beaches ever since the heavy rains hit recently.

“The presence of larger items of debris on Maitland Bay has been brought to the attention of the Environmental Protection Authority and National Parks and Wildlife Service,” the spokesperson said.

“The EPA has also engaged the services of a contract company to assist in managing the large volume of debris at highly impacted locations along the coast of NSW.

“Council will work with both organisations to investigate the best options for supporting the work done by community volunteers at Maitland Bay.”

Across the Coast, 127 tonnes of storm related waste was delivered by residents to Council’s waste management facilities.

A small army of volunteers rid some northern suburbs of graffiti

Calls for volunteers to regenerate flora and fauna