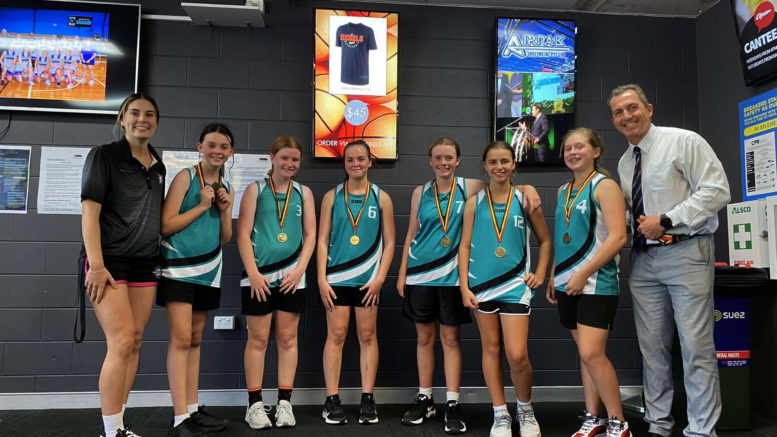 Under 13 Women’s winners, the Warhead Warriors

Breakers Indoor Sports Stadium hosted the Grand Finals for the Central Coast Youth League competitions in a number of age groups over the past two weeks.

The first age group to assemble were the Under 13’s on March 30, with three grades in both the women’s and men’s categories playing off for their respective titles.

The Central Coast Grammar School Pistons won the boys A Grade final against a tough opposition in the Cobras, who had previously won the league ladder.

One stand out was Charlie Mogg for the Pistons who scored 33 points.

In the women’s A Grade, the Warhead Warriors clinched victory over the Super Girls 25 – 24.

A strong half-time lead for the Warriors was trimmed away in the closing minutes of the game until one last three-pointer opportunity for the Super Girls could not be completed before the bell.

In the B Grade, the Panthers from Terrigal Avoca AFL club, won the boys while the Green Point Christian College Rising Stars won the girls against the Strikers after heading into over-time.

Two senior Crusader players, Bronte Moore and Tom Akamarmoi presented the teams with their winning medals and now prepare for the launch of their seasons in the NSW Regional Waratah League, with Round One at Breakers Stadium on Saturday, April 10.

In the meantime, the Rockstars won the Under 9’s women’s league and the Raging Rapids the mens.