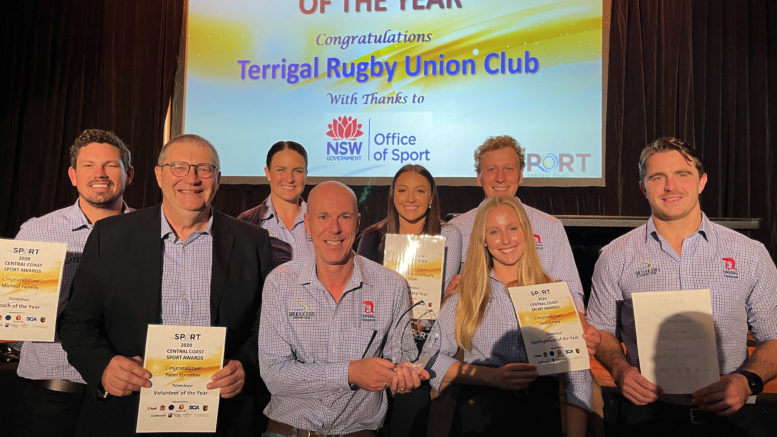 Terrigal Rugby Union Club  won the Club/Association of the Year Award with Sport Central Coast at their annual awards night on the evening of Thursday, March 25.

The award was in recognition of a number of successes for the club over the 2020 season, both on and off the field.

On the field, Terrigal Rugby came away with three Premierships in the Firsts, Seconds and Women’s Divisions, as well as reaching the Grand Final in the Thirds.

The season also ended with a number of individual awards being handed out to Terrigal members by Central Coast Rugby Union.

Sam Kenny won the much longed for Sid Noble award for men’s player of the year, as did Elise Connolly with the Women’s Representative Player of the Year Award for her efforts in the Sevens competition.

The win for Terrigal also recognised the renovations they underwent to build extensions on the clubhouse and add in women’s changerooms too.

Finally, a modified rugby gala day was organised for kids with sensory difficulties that was unfortunately postponed to 2021 due to Covid and now awaits a reboot this season.

For Terrigal Rugby Union Club President, Tim Larke, the win was a big surprise, especially considering the competition they had in The Lakes Rugby Club and Central Coast Rugby Union (CCRU).

“They were just as worthy winners as we were,” said Larke.

“CCRU did an outstanding job of getting the game going during a very trying year with Covid.

“There were a lot of sports that weren’t played last year because it became too hard to do it, but CCRU took a chance, along with the support of all the member clubs, and they should be applauded for their efforts as well.”

Terrigal Rugby also came up against the Central Coast Crusaders, Central Coast Heart and Mingara Athletics Club in the final contention for the award.

“There are other codes and sports that are prominent on the Coast, so it was nice to bring Rugby Union as a whole to some prominence amongst the other sports that were nominated.

“I think that this is the biggest gain of the lot.”

“Whether we won it, the Lakes Club or CCRU, it doesn’t matter, it just matters that Rugby Union was brought into the spotlight.”

For Rugby as a whole, the win is a nice bookend to the 2020 season to come shortly before the kick-off of 2021.

The first round of the CCRU competition will be played on Saturday, April 10.

Terrigal will play against Kariong at The Haven Oval, Warnervale against Hornsby at Woongarrah Oval, Ourimbah against Woy Woy at Woy Woy Oval, and Gosford against The Lakes at Gosford Showground.

Also, this Saturday will also see the start of the Central Coast Women’s 10’s competition, with eight teams now registered to play off for the 2021 title.