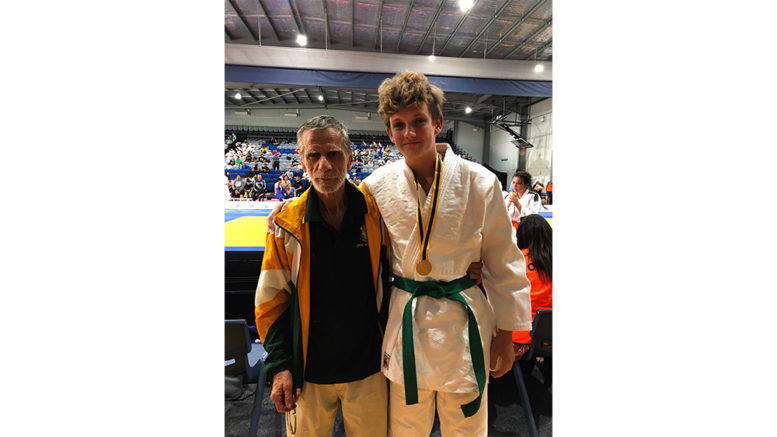 Two members of the Kido Mingara Judo Academy have finished with podium placements at the Central Coast Open Championships on Sunday, April 11, held in Erina.

14 year old Huxley Learmont punched well above his weight when he stepped into the Under 18 Cadet division and came away with the gold medal.

His fellow, Shidoh Isogai, placed silver in the Under 12 Junior Boy division in another exceptional result.

There was speculation as to what the level of competition would be after waiting a whole year for a competition to go ahead due to Covid-19.

Nonetheless, reports from Kido Mingara noted the contest was nearly at the pre-pandemic level with all contenders performing well.

In the final of the Under 18 Cadet, Huxley encountered a 17 year old, but despite the age and strength difference, performed exceptionally well in his fights.

In his opening bout, Huxley countered his opponent’s throw with an instinctive reflex Seoinage (shoulder throw).

According to Kido Mingara’s Coaching Director, Pete Acciari, the throw was not what he had planned to perform, but he had been trained in the move and so it was a great result for him to execute it as an “automatic” response.

Acciari also noted that Huxley adjusted his throws to employ his ashi waza (foot techniques) and set up his winning throws.

For Shidoh, performing in the Under 12, under 40kg category was a great step along his learning process.

Acciari noted that Shidoh was hesitant to employ his powerful attacking throws and in charging in for a grip, allowing the opponent time to set up techniques.

After defending for much of the bout, Acciari thought he did well to secure the second place.

Coaches, Ralph Chicktong and Chad Acciari, were incredibly happy with not only the results but more particularly the energy shown by both players.

They are keen to train up the new enthusiastic group of novices that look forward to their training on each Wednesday.

“All are ready to go for their 1st Grade in 6 weeks’ time,” said Acciari.

Yoga could be the answer for you