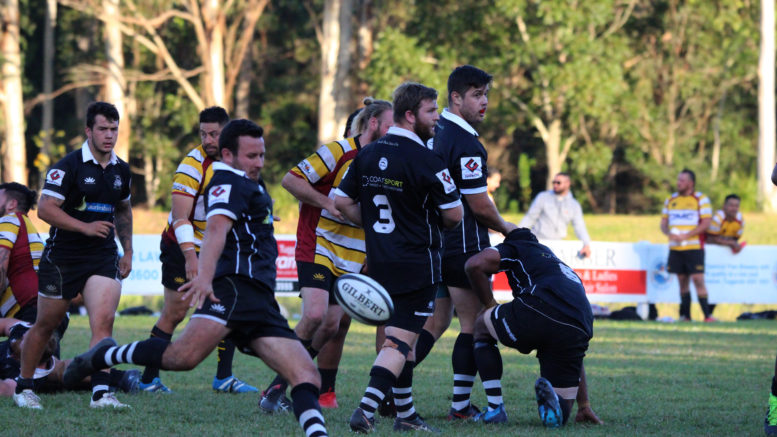 It was a profitable Round Three for the Ourimbah Razorbacks on Saturday, April 24, winning three out of four matches against The Lakes in the Premier One and Two, Women 10’s and President’s Cup.

The greatest of the performances came for the Premier One team in a run-away win that finished 52 – 10.

At Ourimbah Rugby Park, the hosts proved too strong for The Lakes who are left languishing on zero table points after two successive losses.

After an even opening to the match with both teams finding chances to score, it was the Razorbacks who got over the line first.

No.8, Rob Peden, did the damage with a try under the posts and he followed this up with a second eight minutes later to give his side a 14 point lead.

A further try came for the Razorbacks before the end of the first half, again converted by Flanker Jarrod Grange, to make the half time score 21 – 0.

In the second half, more opportunities came for The Lakes to open their Round Three account, but their attacks often broke down close to the line, outmatched by their host’s defence.

Meanwhile, the Razorbacks continued to make the most of their chances and get over the line, posting a further 31 points in the second.

The Lakes never stopped trying, posting two tries late in the match to relieve some pressure, but it was too little too late.

In the end, the scoreboard read 52 – 10, with a hat trick coming for Rod Peden, two tries for Fly Half, Matt Martin, and one for Josefa Biu, Connor Peden and Patrick Martin.

Best players for the Razorbacks in the match were Rob Peden, Matt Martin, and Centres, Owen Turner and Dan Jones.

For The Lakes, No. 8, Sean Anlezark, was a stand out in the forward pack and Fullback Macui Rauluni showed off his dangerous play with the ball in hand, scoring one try for his team.

The other try came for Ben Kaifa.

For Ourimbah’s coach, Matt Hopkins, the win was a clear indication of the progress being made at training, although there are still areas that need improving.

“The competition is not won in April, it’s won in September, so until then we just have to keep going,“ he said.

“In the meantime, we need to improve on our discipline.

“Right now, it’s lacking at times when we pointlessly look to change a referee’s decision.

“Instead, we need to focus on us, look to our own jobs and take the referee out of it by being clinical with our actions in attack and defence.

“This will come by staying onside, making our tackles legally and not allowing the ref to rule a 50/50 call as an infringement.”

Another interesting matchup in Premier One was between Avoca Beach and Kariong.

Played at Kariong Oval, the hosts were able to hold on to a 38 – 24 win after getting away to a good start.

Avoca Beach did kick the opening points with a penalty goal but it was Kariong who then piled on 24 unanswered points in the remainder of the half.

With the second half becoming a much closer affair, this early lead proved the necessary cushion to see Kariong come away with the gravy.

Avoca Beach came back hard and brought themselves one converted try away from levelling the score.

With the game reaching the final minutes, after posting only one converted try against Avoca’s three, the hosts were able to again pull away with a late try to seal their 38 – 24 win.

Best players for Kariong were Lock Taylor Mildren, Winger Kane Williams and Prop Jackson Parkes. Fly Half Mitch Clay was on fire in the opening stages of the match when he crossed for two personal tries, with Logan Campbell, Jake Hubbard and Blake Silvester also crossing over the line.

The win has launched Kariong to the top of the league table with 11 points, sitting atop Terrigal and Ourimbah by only a point.

Behind them on five points are Woy Woy, who posted their first win of the season against Warnervale, who sit on four points.

Played at Woongarrah Oval, Woy Woy held on until the final whistle to finish ahead, 36 – 31.

It was also a very tough contest with some great attack and very solid defence from both teams.

Woy Woy got away to a pleasing start in the match, leading early with two unanswered penalty tries and then heading into half time 21 – 5.

In the second half, Warnervale showed their unwillingness to be undone at home, fighting back to lock up the score at 31 – 31 in the dying stages of the match.

However, it was Woy Woy who scored a try right at the end of the match to snatch victory.

Best players for the Peninsula visitors were Flanker Jazper Doak-Stride and Centre Junior Stowers, while Winger Jim Meya crossed for 2 tries in the match along with one each for Pita Pio, Junior Stowers and Corby Delaforce.