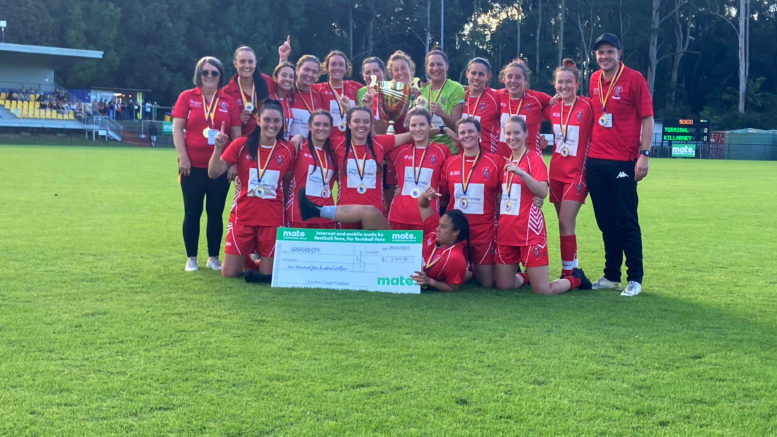 The Grand Finals for Central Coast Football’s MATE Association Cup went ahead on Sunday, April 25, in the top women’s and men’s division, with the women’s victory going to Gosford City and the latter to Terrigal United.

On this day at Pluim Park, the conditions were close to perfect for the initial women’s final between the Gosford City Dragons and East Gosford Rams, and the good weather held through sunset until the completion of the men’s final between Terrigal United and Killarney District SC.

At 1pm, the two pool stage winners in the women’s conference met on the field for a match that was fated to end one of the teams’ unbeaten record in 2021, both in the MATE Cup and first two rounds of the Central Coast Unity Bank Women’s League (WPL).

Despite this, neither team showed any willingness to concede and the first half ended with the game dead locked at 0 – 0.

This was perhaps to be expected considering the stellar defensive efforts of both teams so far this season, with Gosford having only conceding three goals in the MATE Cup and East Gosford yet to concede a goal in all competitions.

However, the levy was soon to break for the Rams and open up a current to ultimately end their perfect start to 2021.

In the 53rd minute, the first goal of the match was scored via a well taken volley from Maddy Yates for the Dragons, and 15 minutes later a second was put away by Britt Nicol.

Two more goals followed for Gosford before the end of the match, with the fourth coming due to great lead up work from Maria Aspitia and finished off with a lovely tap in by Julia Hogan.

The men’s final was soon to follow between the two finalists from the 2020 Battlewin Premier League (BPL), a game wherein Terrigal edged themselves to victory in a tight 1 – 0 win over Killarney.

Both teams were undefeated heading into their Semi Finals and came away with comfortable victories in these games, Terrigal beating Southern & Ettalong United 3 – 1 and Killarney beating Gosford City 3 – 0.

This Grand Final was a much closer affair in a telescopic match that shifted in momentum back and forth between the two teams.

Terrigal were first to get off the blocks with an opening goal coming from Stuart Adams’ strike in the 30th minute, and his team were then able to double their lead via a long range shot by Jacob Melling before the close of the first half.

Killarney came back with a lot of energy in the second half and managed to halve their deficit through a 51st minute penalty goal from Jordy Preston, initially saved but then put away on the follow up shot.

Extra time was required to settle the score between these two evenly matched contenders and it was Terrigal who were able to capitalise.

First, a sublime left footed strike from Jonah Walker sunk the ball into the back of the net to again give Terrigal the lead, and then a second for the same player put the game beyond the reach of Killarney, end score 4 – 2.

With the 2021 Association Cup now at an end after delays in March due to heavy rain, the Central Coast Football sides can put their full attention into the regular season that is already in full swing.

After two matches, both Killarney and Terrigal, along with Avoca FC, are leading the BPL table undefeated on six points, and Gosford and East Gosford, along with Umina United, lead the WPL, also on six points.