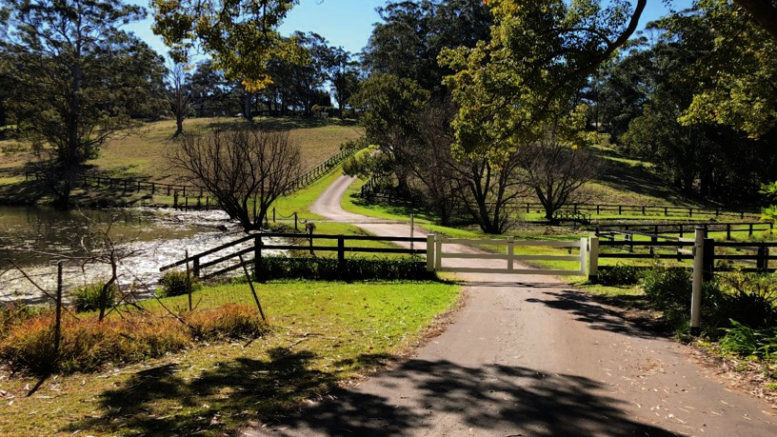 Living Choice has lodged amended plans for its over 55s lifestyle residential project planned for the old Bangaloe Stud site at Kincumber, but residents say the developer still fails to understand the community’s broader concerns.

The developer has removed controversial construction access from Pickett’s Valley Way in an attempt to resolve objections to its Choice Living Avoca development.

“Previously, the temporary construction access was proposed to follow the line of the existing farm track between the north-west portion of the site and Pickett’s Valley Way,” Choice Living Avoca Project Director, Phil Goodman, said.

“Within the original Rural Fire Service conditions this track was also to be delivered as an Emergency Access track for the use of rural fire personnel and was designed to be constructed in such a way that no native trees were impacted.”

Goodman said Living Choice had repeatedly offered to maintain the north-east portion of land where the track is located as “COSS-like” managed land, to maintain and protect the wildlife corridor and significant flora located in the area.

“This level of protection does not exist today nor can it be enforced on small rural lot subdivisions,” he said.

“Reliant on final conditions being issued to Council by the RFS, Choice Living is lodging amended plans to remove the temporary construction access from Pickett’s Valley Way and to re-align the internal staging plan so no disturbance will occur to the flora and fauna in this recognised wildlife corridor.”

Goodman said it was worth noting that many popular and respected facilities were already sited on E4 zoned land in the neighbouring area.

“Today they would be prohibited under Council’s proposed changes,” he said.

“Over time, as each version of the various planning instruments has been adopted, there has been a gradual erosion of landowners’ entitlements without a full understanding and appreciation of the affected landowners.

“This is despite those existing facilities demonstrating that you can maintain an acceptable level of amenity without significant impact or conflict to the surrounding environment and community, who in all likelihood are patrons of those facilities.”

Goodman said the Central Coast Council region needed to accommodate up to 92,000 additional people over the next 20 years.

“This new development by Living Choice is responding to both evolving legislation and market preferences,” he said.

“We look forward to continuing to engage with the local community and contractors as this proposal moves forward.”

But Kincumber and Picketts Valley Community Action Group (KPVCAG) says while removing the Picketts Valley Rd construction entrance was a “welcome concession”, it simply shifts the access point on to the already busy Avoca Dr.

“It has always been the community’s opinion that this development compromises the local character of the Avoca Beach hinterland, is not in-keeping with the intention and integrity of the E4 zoning of the property and has some serious ecological ramifications for the area.

“To say that this concession should satisfy or indeed pacify the majority of local residents once again would indicate the developer underestimates how deeply the community feels about this issue.

“Where Mr Goodman points out that there have been past indiscretions by other developers on E4 zoning, surely this does not stand to justify, nor indeed legitimise the further erosion of the planning instruments and the expectations and faith that these instruments hold.

“This development on Bangaloe Stud will be a ‘closed’ over 50s manufactured housing estate and will do nothing in adding to our sense of local community.”

No objections to new dwelling