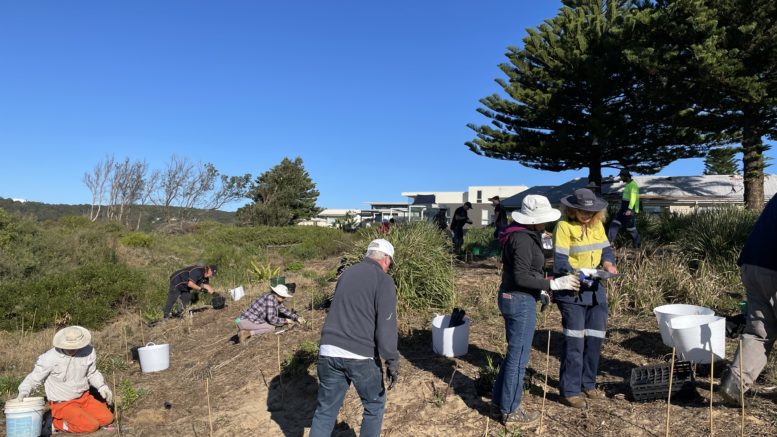 Tree planting a The Entrance is part of a larger commitment by the Greater Bank.

The bank, which has been servicing the Central Coast since 1968, launched this campaign in August 2020 with the aim of planting 75,000 trees across its area of operation.

2,450 of these trees have been planted across various locations in the northern suburbs.

In Long Jetty, 200 trees were planted at the intersection of Willow St and Tuggerah Pde, with 200 also being planted at Mataram Ridge Park on Mountainview Dr in Woongarah.

On Tuggerah Pde, between Fairview Ave and Lentara Walk in The Entrance, 200 trees were planted, with 60 also being planted in Gorokan at the Vietnam Veterans’ Park on Wallarah Rd.

500 were also planted along the Wamberal Lagoon.

The initiative will assist with restoration efforts following storms and floods by bringing together members of the community to help plant trees, shrubs and grasses that are native to the area.

“The project undertaken by the Greater Bank is to have a positive impact on the local environment… looking at the bigger picture, this planting project will help restore what has been lost across the region’s coastline in recent years, as we’ve seen the destruction caused by severe storms and damaging king tides,” said Central Coast Manager of Environmental Management, Luke Sulkowski.

“I want to thank the Greater Bank’s management and staff for their commitment to the preservation of our natural environment, as this valuable initiative will deliver significant benefits to our community for many years to come,” said Sulkowski.

“Planting projects are symbolic of the role the Greater Bank has played in growing together with its communities over the past 75 years.

“We chose to plant 75,000 trees because protecting and nurturing the environment is something that we know that customers right across our areas of operations, including here on the Central Coast, are passionate about,” said Greater Bank’s Regional Sales Manager, Josh Swetnam.

“As these trees grow, they will not only enhance the local environment, but also provide an enduring symbol of our commitment to social responsibility and sustained support of local communities,” said Swetnam.

Collectively, the 75,000 trees will have the capacity to absorb 1.65 million kgs of carbon dioxide each year, which offsets the emissions from 600 cars and 97 people per year.

The Greater Bank has been servicing the Central Coast since 1973, and currently has branches located in Lake Haven, The Entrance, Toukley, Tuggerah, Erina and Woy Woy.

We don’t want to be Sydney’s ‘dumping ground’ – Tesch