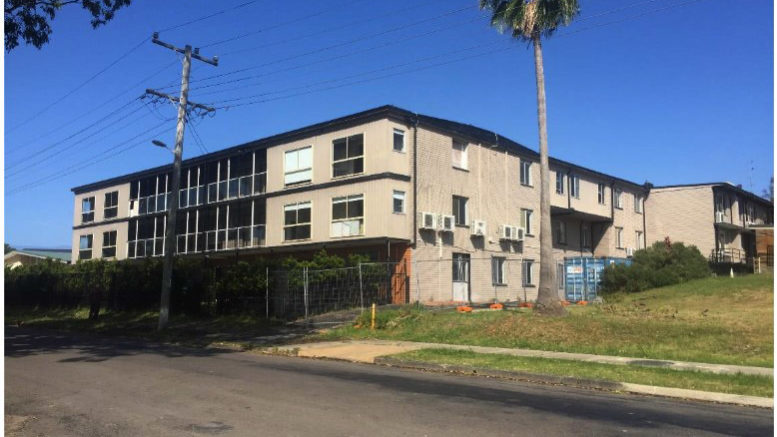 The vacant nursing home in Toukley

Owners of a former nursing home at 51 Peel St, Toukley, want to turn it into a boarding house for up to 84 residents.

The nursing home on a 3,616sqm site overlooking Osbourne Park and Budgewoi Lake, has been vacant and not maintained for many years and the owners plan to completely renovate the three-storey building inside and out.

Plans include 54 boarding house rooms, an on-site manager’s room, four communal rooms, extensive landscaping and façade improvements at the Peel St frontage, parking for 32 cars as well as spaces for bicycles and motorbikes.

Accommodation will comprise 24 single rooms and 31 double rooms, including one manager’s room and three accessible rooms.

The proposal does not change the bulk and scale of the existing building and this new DA is a decrease in the number of boarding house rooms from 64 to 54, from the original DA which was rejected in September.

Central Coast Council will receive submissions about the proposal until April 19 and, so far, eight have been lodged objecting to the boarding house and none in support.

One submission from a local resident says that the proposal should be rejected as it offered nothing for the boarding house residents other than a place to sleep.

Common threads in the submissions included the shortage of support services, the lack of employment and education opportunities, significant impact on traffic flow, lack of public transport, safety, social and health issues.

One submission stated that the proposal was out of character with the residential nature of Toukley, referring to a 2019 study by University of NSW City Futures Research Centre, which stated that registered general boarding houses with 61-plus residents were categorised as “very large”, that they were not common, and only located in metropolitan centres with large population densities.

Further evidence of the unsuitability of the size of the boarding house can be determined using information in the Social Impact Statement (SIS) of the DA, the submission continued.

The SIS says that at the time of the 2016 Census “0.15 percent of the population of Greater Sydney was counted in boarding houses or private hotels”.

That submission pointed out that Toukley and surrounding suburbs – Canton Beach, Noraville and Norah Head – had about 10,000 residents and, by using that 0.15 percent benchmark, a suitably sized boarding house for Toukley would have only 15 residents, making this proposal on its own five times larger than what would be appropriate for the locality.

These three examples alone indicate that Toukley and its surrounds already have an adequate proportion of affordable rental properties in comparison to Greater Sydney, the submission said.

“Additional to these three properties, there has also been a large number of granny flats built in recent years that would also contribute to the available rental stock.”

Local residents say in their submissions that there is already pressure on health services with bulk-billed medical centres booked out days in advance and they question where the boarding house residents would get local work in an already high unemployment area, with minimal local employment opportunities.

An overview in the SIS described the demographic of the Toukley area as “largely disadvantaged” and one local resident questioned “if boarding house residents are already disadvantaged then shouldn’t they be placed within a community that is more advantaged to help them?”

“Placing disadvantaged persons into an already disadvantaged community is in no way best interest for either party,” the resident’s submission said.