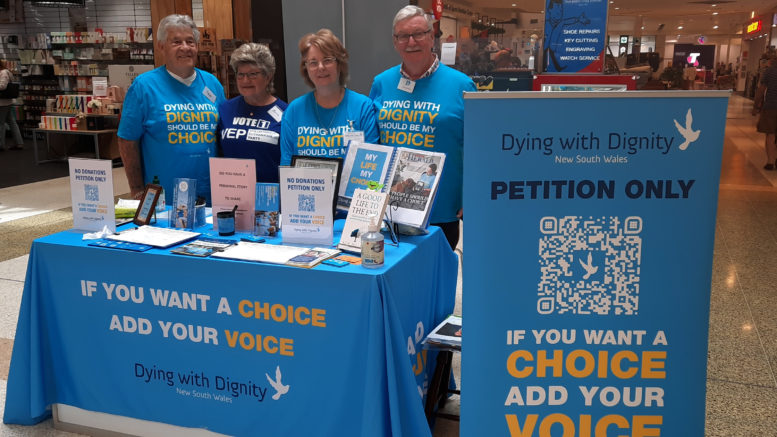 The Central Coast branch of The Voluntary Euthanasia Society was founded in 1996 with the aim of promoting Voluntary Assisted Dying laws for terminally ill people.

Twenty-five years and a name change later, the group now known as Dying with Dignity NSW, is still campaigning for VAD (Voluntary Assisted Dying) laws to be created in NSW.

The Central Coast Branch has been setting up tables in shopping centres around the area, usually at Bateau Bay, petitioning for NSW MPs to collaborate and pass a Bill that will allow people who meet a certain criteria to pass away on their own terms.

“We’ve been collecting many hundreds of signatures and people have been lining up to sign our petition,” said Dying with Dignity’s Central Coast Co-Ordinator, Beverly Symons.

“All of the MPs on the Coast are supportive of VAD laws, as is 88 percent of the Australian population,” Symons said.

The petition which can be signed on the internet or in person at a stall, currently has more than 30,000 signatures.

“We’d love to achieve 100,000 signatures by the time the Bill is debated in the second half of this year,” said Vice President of Dying with Dignity NSW, Shayne Higson.

There is a Bill for VAD laws currently being drafted by Independent MP for Sydney, Alex Greenwich, based on the Western Australian model.

“Access is available to people who have a disease, illness or medical condition that will cause death within six months, or 12 months for neurodegenerative conditions and where suffering cannot be tolerably relieved.

“It includes strong safeguards against coercion and allows doctors to conscientiously object.”

Alzheimer’s and dementia patients are excluded from accessing VAD as they do not have the decision making capacity that is needed.

“NSW hasn’t brought in any Bills for voluntary assisted dying.

“The last attempt was shut down by one vote against it in the Upper House,” Symons said.