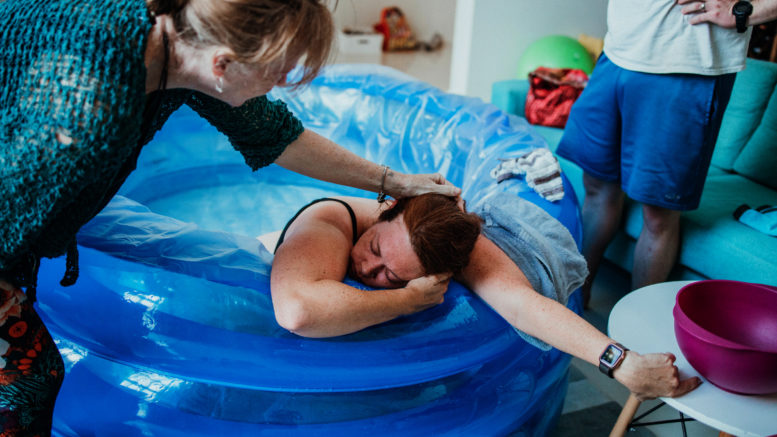 Home birth is becoming increasingly popular on the Central Coast, with Georgia Lienemann of Jilliby saying that she chose home birth twice because she wanted to feel empowered and in control.

“I chose to birth at home because, as someone considered as ‘low risk’, I knew that it was statistically as safe as birthing in a hospital, but with much better outcomes for mothers such as lower rates of trauma and post-natal depression for example,” Lienemann said.

“I ended up with two beautiful homebirths.

“My first was, in fact, such a joyful experience (literally orgasmic, if you can believe it) that I turned immediately to my husband and said I wanted to have three children instead of our agreed two.

“Everyone told me about the pain, but they didn’t tell me that if a woman is deeply relaxed it can be one of the most profoundly pleasurable experiences of her life.”

Karyn Besley changed to home midwifery four years ago after being in the hospital system for 20 years.

“I have serviced the Central Coast and Newcastle for the past four years,” Besley said.

“I decided to switch to home care to allow women to choose the full continuity of care experience.

“In the hospital system, they are guided by policies and procedures that can limit women’s choices.

“In the home, women are more informed, and they are given choices, the power is given back to them.”

Besley said she starts seeing women six weeks into their pregnancy and all the way through to six weeks postpartum.

“We have about 10 to 12 visits with the mothers in their own homes before they have the baby,” she said.

“In that time a relationship is built, so when birth happens, we both know what is needed.”

She said the main reasons that women decided to opt for home birth were because of a previous traumatic experience or because they want continuous care.

“Many of them want continuous care and have no other choice but to come to a private midwife because they have been excluded from their hospital continuity care model,” Besley said.

“Even if there are some hospital continuity care facilities around, sometimes women can be excluded if they have a risk factor.”

A birthing documentary made by three women will be screened at The Savoy, Long Jetty, in April.

The international multi award winning documentary, Birth Time, has opened up conversations around the importance of continuity of care, and problems within the current maternity system.

Created by filmmaker and producer, Jerusha Sutton, actress, Zoe Naylor, and midwife, Jo Hunter, the documentary aims to change the current politics, practice, and funding of maternity care across the developed world and share information around new and evolving midwifery models of care, including home births.

Be the first to comment on "Home birth is an option"