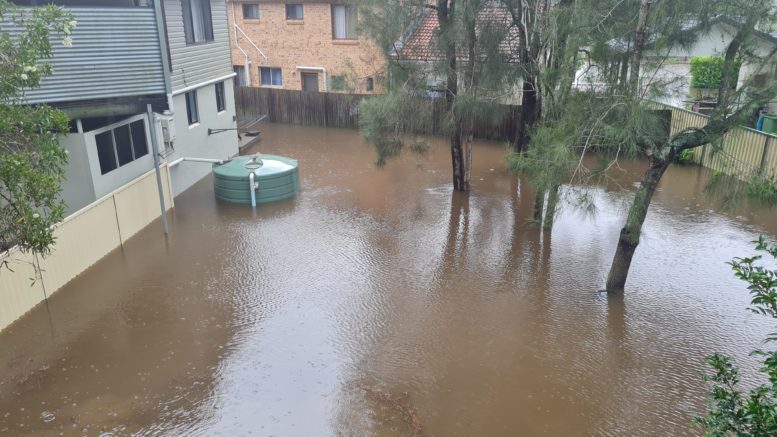 Sarah Scarlett, a resident of Chittaway Bay, says that after this photo was taken at her mother-in-law, Vicki Wright’s place in Moui Ave, the water came up about another 15cm.

She said luckily the house is on stilts, it’s the only house in the street on stilts, and it’s nicknamed the “treehouse”.

“She’s really happy that she’s up high and Vicki is fine, but the neighbour’s house is all underwater,” Scarlett said.

“All of their houses have just been re-done because of the floods in February last year.

“The residents get a bit upset if people are just coming around for a cruise to have a look because as they drive through, the waves are lapping into their houses and causing more problems.

“And that water is a bit yuck and really dirty.

“Some people are making a bit of fun out it, some of the kids are out in the kayak, because what can you do?

“You’ve just got to try and have a positive attitude about it,” Scarlett said.

“I think a lot of people got out as many things as they could, one of the neighbours was moving out truck loads of their belongings beforehand.

“Some of them have pools in the backyard and I’ve seen people putting mesh around the fences to stop all the mud coming in.

“People have been putting a few preventatives in place that helped out a bit.

“The dirty water still comes in but at least it will filter out the weed and other muck.

“Now I think everyone is just really fed up.

“I know a lot of them have got pets, so where do you take your dogs to do their business, you don’t think of that.

“The SES and Council workers have been around to block off all the roads, most of Lakedge and the surrounding streets are blocked.