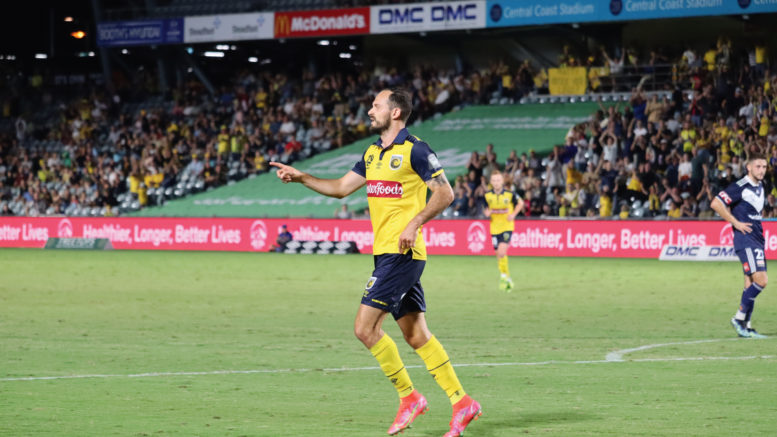 Two photos of Marcos Ureña celebrating his goal, pointing back at Daniel Bouman who came up with the assist

A 1–1 draw against Melbourne Victory has split the Central Coast Mariners’ safety net at its seams, with the heavy momentum building Adelaide United side now only a win away from the top spot.

It was an unfortunate start for the home side, with Victory finding the opener through Callum McManaman in the 20th minute.

Victory’s Jake Brimmer stepped up for the free kick, finding McManaman unmarked on the right, before the forward volleyed the ball past Mariners’ keeper, Mark Birighitti, into the net.

Despite the deficit at play, the hosts kept pressing, with several chances coming from Matt Simon and Oliver Bozanic going amiss as they searched for the equaliser.

A yellow card was issued for Gianni Stensness in the 30th minute for a foul on Elvis Kamsoba.

After this it wasn’t long before the Mariners levelled the score through striker Marcos Ureña in the 31st minute.

A skilful dummy and turn set from Daniel Bouman down the right found Ureña in space, and the attacking man slotted the ball home past Victory keeper, Matthew Acton.

In the dying minutes, the teams were poised to enter the half time sheds in a stalemate, and a foul on Bouman at the edge of the box heightened the crowd’s emotions.

Referee, Alireza Faghani, issued a free kick in the 43rd minute but nothing came of it, with Ureña firing over the crossbar.

The Mariners looked to come back strong in the second half, immediately pressuring their opposition into a constant state of ultra-defence.

In the 50th minute and just metres away from the box, Simon pounced on a stray ball and tried to direct the ball goalward as the Victory defence clambered to guide the ball clumsily to the left of goal.

A break of play allowed the sides to rest as Victory’s Storm Roux was carried off the pitch on a stretcher, replaced by Aaron Andersen.

With the scoreboard level as they entered into the last third of the match, both teams seemed to play from end to end, desperate to find the back of the net.

Yet nothing stuck as Simon and Bozanic fired shots to no avail, with the visitors also having a go through Kamsoba in the 77th minute.

A double change for the Mariners in the 78th minute saw Michal Janota and Alou Kuol replace Ureña and Daniel DeSilva, as Victory also made a change with Birkan Kirdar coming on for Brimmer.

Victory’s Nicholas Ansell was then shown a yellow card for holding back Kuol in the 79th minute.

Once five added minutes were announced, the game seemed to ramp up in tempo again, with the Mariners firing plenty of corners as the clock ticked closer to full-time.

The final whistle saw the four man referee group booed off the pitch as they headed down the tunnel, with Mariners’ fans unhappy with several calls throughout the 90 minutes.

The Mariners will now have to recompose themselves for their next home game against a strong Adelaide United side on Thursday, April 1, kick-off 7:40pm.

Top spot lost by the Mariners

One Culture Mariners to be launched