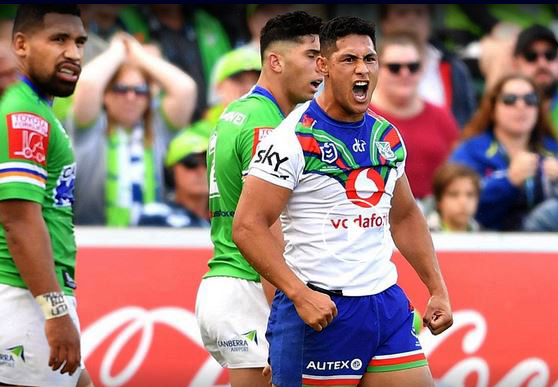 A try-fest was witnessed in Canberra at GIO Stadium on Saturday, March 27, between the Raiders and the Central Coast located New Zealand Warriors, the win coming for the away side in the dying moments of the match.

It was the Warriors who got on the score sheet first through Addin Fonua-Blake in the fifth minute, a try that came from a first phase team attack involving four quick passes to find the prop in space 10 metres out.

From here, a flurry of Raiders dominance filled up the rest of the first half, with the Warriors looking to be completely washed away.

Four of the Raiders’ five tries came one after the other, topped off by a successful field goal kick to leave the half time score positioned at 25 – 6 to the home side.

The Warriors hit back early in the second half, starting almost straight away in the 42nd minute through a 50 metre, one phase, team try that was orchestrated and scored by Kodi Nikorima.

The team kept pushing the Raiders onto their back feet as a few offloads kept the ball alive and returned it to Nikorima’s hands.

The halfback got his last touch on the ball on the 20 metre mark, sold the dummy with a forceful change in direction to straighten up and gun his way to the try line.

With a whiff of opportunity now in the sail of the Warriors, another head on gale came from their opposition in a third phase play that marched the side 70 metres up the field all the way to the white line.

The ball made its way across the Raiders’ attacking line out wide, where Jarrod Croker ran the ball up to the half way mark.

His offload in the tackle found Jordan Rapana, who kept the ball alive with a kick downfield that was gathered in the goal area by the forward surging Elliot Whitehead.

A successful conversion by Croker brought his side to their top-most score this day, at 31 points.

From here, the rest of the game went the way of the Warriors, first with Bayley Sironen scoring his second try of the season under the post, capitalising on the nimble, spinning run of captain, Roger Tuivasa-Sheck, that brought the ball up to within grasping reach of the line.

Their next try was scored by Ben Murdoch-Masila, coming from Nikorima’s pass that caused controversy for its angle leaving his hands.

The home crowd and coaching staff certainly determined the ball to have gone forward, but referee, Henry Perenara, deemed it to have been flat.

Regardless, the Warriors were getting closer, and a 69th minute try to Tuivasa-Sheck brought the visitors within striking distance of the lead.

The game’s last try came to Adam Pompey in the 77th minute after two passes to the player in the outwards moving second line of attack brought Pompey into the corner with the ball.

Nikorima’s conversion brought the Warriors’ lead out to three points, meaning the Raiders would have to score another try to steal back the win.

In one final turn of the game, in the very last minute, the Raiders had the opportunity to do just this, but a try saving tackle from Tuivasa-Sheck denied the hosts the satisfaction.

The ball was swung wide to the hands of Rapana who launched himself for the line.

A video referee inclusion brought the dive into slow-motion, where the ball was clearly shown to have been pushed out of Rapport’s hands by Tuivasa-Sheck at the last moment.

The nail-biting contest came to an end in tremendous style and to the great satisfaction of a very confident Warriors team, final score 31 – 34.

The Warriors will now prepare for their next outing in the NRL against the Sydney Roosters at Sydney Cricket Ground on Sunday, April 4.

Be the first to comment on "Late game clincher for Warriors"