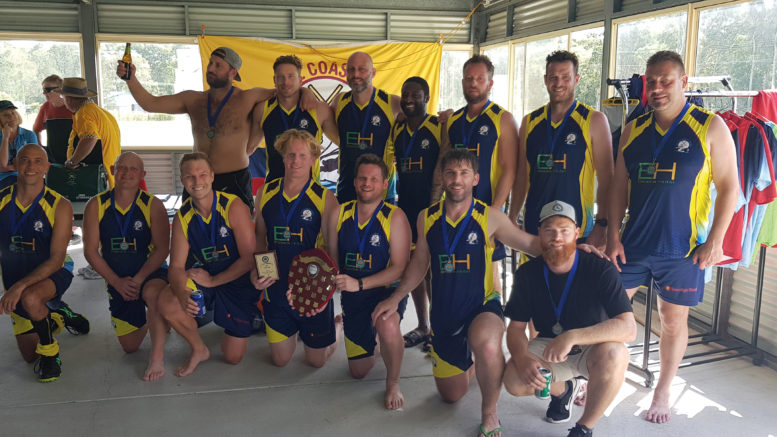 The Central Coast Over 34 Years Masters’ Division One hockey team have won the NSW State Championships at Central Coast Hockey Park over the weekend from March 27–28.

The competition involved two divisions of regional hockey teams in the 34 years age category, with Central Coast Hockey entering one team in each, as well as two divisions in the 65 and overs.

For the Central Coast 2 side, an almost flawless run in the group stage ended with the side undefeated before heading into the Semi Final, where they were outmatched by Newcastle.

On Friday, the team began with a strong yet close win over Bathurst, 3–2, and followed it up with more convincing win over Metro South West in the afternoon, 4–0.

The next morning, the team posted another big win over Lithgow, in a game that ended 5–1 and moved them into the finals series to begin that afternoon.

Here, the team were met with a very competitive Newcastle opposition in a match that refused to reveal its victors until the very last.

With five minutes left in the match, a goal was scored by Shaun Harding of the Central Coast to give his team the lead in the closing stages.

However, right on full time, Newcastle scored a leveller to push the contest into a penalty shoot out.

This went the way of the Northern rivals with a penalty goal tally of 6-2, and Newcastle then advanced to the Grand Final ahead of Central Coast.

“Over the weekend they exceeded expectation with their performance,” said Johnson.

“There were some good goals scored by the guys, with players such as Peter Moore putting in a good showing in the midfield.”

For the Division One side, Newcastle again presented the greatest challenge and even won their first encounter in the group stage, 2–0.

However, with three wins against Metro South West, Sydney and Lithgow, the Central Coast advanced to the finals after finishing second on the group ladder.

In the Semi Final, Central Coast faced up against Lithgow again and came out with the win after a convincing 5-1 finish.

In the Grand Final, the opposition was none other than Newcastle who made sure the game was kept in the balance all the way throughout.

Nonetheless, Central Coast shot out to an early 2–0 lead and maintained it going into the second half.

Half way through the second half, a conceded penalty went the way of Newcastle, which was put away to bring the game back to a one goal contest.

With about five minutes left in the game, the home side managed to score and re-establish a two goal lead that saw them through to the final whistle, end score 3–1.

“The game was in the balance after Newcastle brought the score to 2–1,” continued Johnson.

“Newcastle had a team full of very dangerous players, so with the score that close there was always a concern that they could come back and win.

“In the end, it was largely down to the experience of our midfield combination of Stuart Fletcher, Hugh Wickert and Lee Cormack that we were able to take control of the game and secure our win with a late goal.

“There were a couple of key players unavailable for the first match against Newcastle who returned for the finals so that everybody was back on deck and available and this ultimately made the difference.

“Given the match experience of the guys, once they got into the semi-finals they knew what they needed to do to win and how they needed to achieve it, so there was always an air of confidence about them.”

At the conclusion of the Championships, there was more good news for Central Coast Hockey with the announcement of six of the team’s players being selected for the NSW State team.

The win also marks a hopeful beginning to a new era of hockey on the Central Coast, this being the first State competition held her since the completion of facility upgrades from April to June, 2020.

The organisation and implementation of these upgrades were led by Johnson, in an unpaid capacity, and ultimately led to Central Coast Sports awarding him as the Volunteer of the Year at their annual Awards Night on Thursday evening, March 25.

In Johnson’s own words, it is rather pleasing seeing the growth of his sport, the success of the local teams and the enjoyment that it is bringing to families.

“That is the real reward.

“Prior to last year’s work on the upgrade, we were not eligible to host state championships, whereas now we can and have done so.

“By doing all that work last year, it has enabled us to compete in this tournament and actually win it, so I get gratification from seeing the results come in after all the hard work that I’ve put in over the years.

“I’ve grown up with hockey since I was five years old and I love the fact that it’s such a great family sport.

“Here on the Coast, we have one location, Central Coast Hockey Park, where the whole family can come to and everybody can participate in a very family oriented sport.

“I have a passion for hockey and for seeing people enjoy our sport and ultimately be successful.”

Be the first to comment on "Masters of the State"