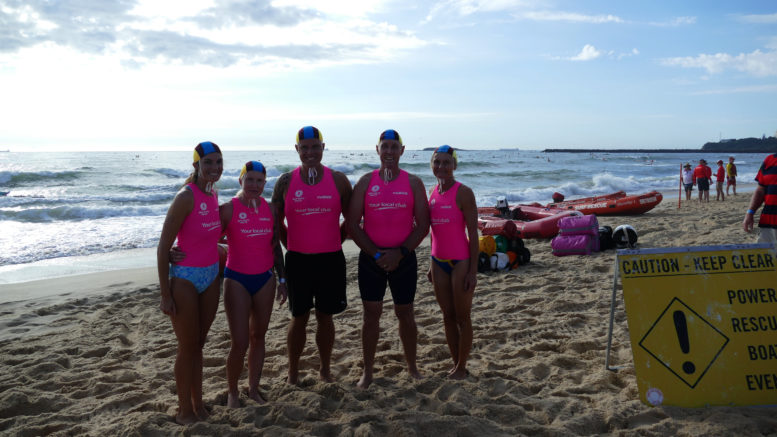 In particular, success over the weekend came to Shelly Beach, North Entrance and The Lakes SLSC’s, with more than 40 medals between the three of them.

One highlight for Shelly Beach was Julie-Ann FIllingham winning her first medal at the state level, winning the Female Board Rescue event with her partner, Khali Vincent.

According to Dan Kingsley, the club’s publicity officer, the Male Board Relay trio have been chasing this gold medal for many years of competition at the State level.

“The fact that we did so well in the point score compared to other years in all events is largely down to the good coaching under Keaton Watts for water events and Dave Smith for sand,” Kingsley continued to say.

“Ultimately, it was also our depth and breadth of competitors that got us all those extra points.”

Kingsley is also a Masters competitor who achieved silver in the Surf Race on his own and in the Board Rescue with Keaton Watts.

As well as Shelly Beach, North Entrance SLSC achieved a high level of athletics over the weekend, finishing ranked 20th out of the 70+ clubs in attendance.

One notable performance for the club came through the Male Double Ski events, where upon North Entrance managed to secure first place in the 30-34, 40-44, 50-54 and 75+ age division races.

In the 40-44 years race, Jared Wait teamed up with former Australian Kayak squad member, Justin Dean, who found gold after only 18 months back competing in water sports for North Entrance.

For the club’s team manager and vice captain, Ken Lupton, the positive results of this year were largely due to the preparations that club members have made and their great location for surf lifesaving sports.

“North Entrance has always had a strong heritage in the Ski and Board events,” Lupton said.

“We benefit from having Tuggerah Lake at the back of our club so that when the surf is out of control we can keep training.

“The team has put a lot of training in for at least six months in the build-up to the State Championships, and they are paddling all year round as well.”

“Some of them drive up every Saturday to Newcastle to train with other clubs if there is a big squad training up there.

“And at the end of the day, our member base is full of dedicated craftsmen in surf lifesaving sports.”

Lauren Goldie found gold in the 35-39 age group Iron Women event and continued on to win the Single Ski and Dual Board Race as well.

Her team member in this last event, Nikki Fitzsimmons, also won the 30-34 Rescue Tube Race, as well as the 110 years min. Board Race along with Goldie and Leeanne Longford.

Overall, it was a very successful weekend for the Central Coast, with even more podium placements coming from our region’s other clubs, such as Terrigal, Avoca, North Avoca, Umina and Ocean Beach.

The State Championships will continue for one more weekend for the Boat events from March 19-21.