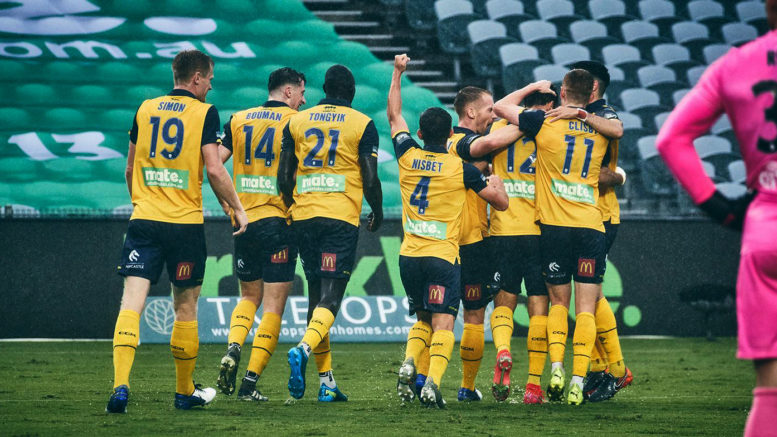 The Mariners have drawn in the A-League at Central Coast Stadium, 2 – 2, against Perth Glory.

Starting after a thirty minute delay due to rain that did not let up for the entire 90 minutes, the Mariners went searching for their fourth home win and their second against Glory this season.

However, in the torrential wet weather, unseen before this season, the Mariners found it more difficult to pull off their swift midfield play and confident, light touches on the ball, with the field spurting sprays of water with every player’s footstep.

Nonetheless, the weather did not prevent the Mariners from adding to their league leading opening goal count this season at seven, finding their eighth through Marcos Ureńa in the 25th minute.

The grounded cross came from Daniel Bouman to Daniel De Silva, who side footed the ball and forced the diving save from Glory keeper, Liam Reddy.

The ball landed at the feet of Ureńa, who had to back track at a tight angle and guide the ball between the legs of the scrambling keeper.

The goal was hard fought to actualise the dominant play of the Mariners in the first third of play, but the score was equalised by the head of striker, Bruno Fornaroli, in the 41st minute.

The smoothly curled cross came in from Neil Kilkenny who, in making the most of the space left to him, earned himself his sixth assist of the season, finding Fornaroli on the run ahead of Kye Rowles.

The Mariners then finished the first half with an increased level of energy, with a final succession of shots coming from De Silva, Oliver Bozanic and Ureña, one after the other, with the keeper, post and then the defender coming to the rescue of the visitors.

With the scores level, the second half commenced and Glory brought into it a newfound dominance, although they found it difficult to capitalise on it.

Yet the breakthrough came for Glory in the 76th minute from Nick D’agostino, who slid the ball past Birighitti on the inside of the near post.

The pass came from Andy Keogh, who turned on his axis to find the space to thread the ball through to the attacking Nick D’agostino, who put too much pace on it for Mariners’ keeper, Mark Birighitti, to get down in time.

The final ten minutes were tense, with the Mariners forced to chase the game in the slippery conditions.

A golden chance came for Matt Simon after a penalty was awarded to him in the 86th minute.

A long drawn out VAR check confirmed the headbutt contact of a Glory debutant on Simon from behind, completely missing the ball.

Once the VAR check was complete and referee, Kurts Ams, overturned his initial decision to award the penalty, Simon’s powerfully driven ball found its nest in the back of the net after sending Reddy the wrong way.

With five minutes of injury time announced, the game did not dwindle out, with more chances coming to both teams.

A defensive breakdown in communication between defender, Ruon Tongyik and Birighitti nearly led to Glory captain, Diego Castro, moving in to score the winner.

Soon later, a cross from Joshua Nisbet ricocheted off the side of Kilkenny and caused the crowd to roar their request for another VAR check, but it was not given.

In the end, the 2 – 2 score was maintained, the first draw of the season for both teams.

The Mariners will now have a break from matches for more than a week, but will return to play against the upcoming in form Melbourne City at AAMI Park on Monday, March 22, a game the hosts will see as their chance to knock the A-League leaders out of their cushioned positioned on top.