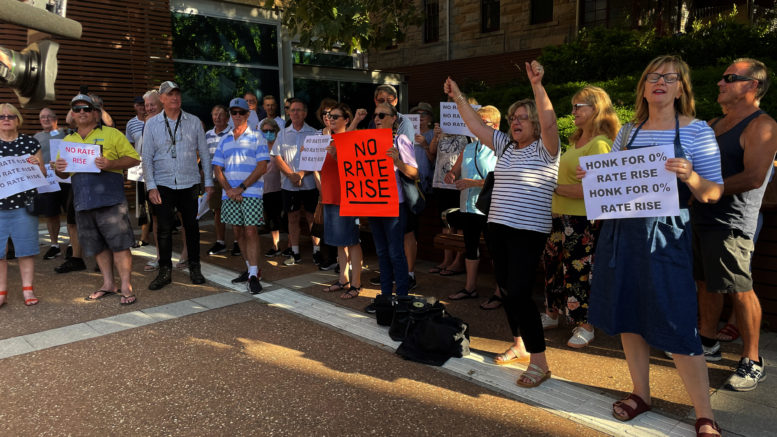 Protesters outside the Council Chambers

Despite the dozens of disgruntled residents gathered outside Gosford Chambers ahead of Central Coast Council’s February 3 meeting, and widespread community backlash protesting a proposed rate rise, Council went ahead at the February 8 meeting with the 15 percent rate rise proposition. (See separate story)

Protesters tested Administrator Dick Persson’s patience when he bravely fronted them for a conversation before he Chaired the first Council meeting of the year.

Resident, Marianne Hamilton, who later spoke at the Open Forum, claimed that the survey which ratepayers were invited to complete was “rigged”.

“It doesn’t give you the option to say no rate rise or anything other than 10 or 15 percent,” she said.

“I feel like Council needs to be a lot more transparent, there are a lot of confidential meetings for example.”

Another resident called for an answer on why Persson refers to ratepayers as “shareholders”.

One woman asked: “If we don’t pay our rates, what happens?” but Persson replied “You won’t win that battle”.

Persson faced derogatory signage, television crews and journalists who moved in to record every word.

He admitted he may have called one person a jerk when he couldn’t get his answers out before people started baiting him, but said afterwards that he failed his own standards of behaviour and was sorry for that.

However, the Administrator did have a couple of wins.

When he asked protesters who had read his interim report, only a minority put up their hand.

He asked how many realised that Wyong residents would actually on average pay $3 a week less in rates even with a 15 percent rate increase because of the effect of rate harmonisation, which would see former Gosford council residents pay on average about $7 more.

Quite a few ratepayers said they hadn’t realised that.

When he finished, the crowd politely applauded him.

During the February 3 meeting itself, Persson said services such as libraries, pool hours and sporting field maintenance would be cut back if the proposed rate rise did not get IPART approval.

The deadline for the Council’s submission to IPART was Monday, February 8, and the Council indicated last year that it might need an extension for the report on why such a rise was needed.

“This need for a rate rise has come out of left field and IPART is aware of that and so is being accommodating,” Persson said.

This week’s meeting was unlike last week’s, with protesters outside and the public gallery packed, if you take into account Covid safe rules.

But no protesters against the rate rise turned up this week.

The Wyong public gallery had room left over for a handful of latecomers who had not realised they needed to book a seat.

Even then, there were still plenty of spaces left over.

Persson expressed his surprise that nobody had registered to speak about the proposed rate rise.