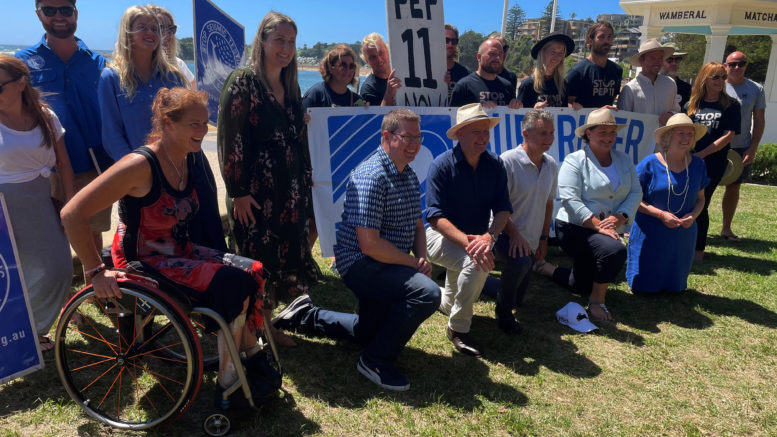 Federal Opposition Leader, Anthony Albanese, joined Coast MPs, Emma McBride, (Dobell) and, Pat Conroy, (Shortland) at Terrigal on February 5 to call for the cancellation of the PEP11 licence for oil and gas exploration drilling off the Central Coast.

With the licence up for renewal on February 12, Albanese told a crowd comprising MPs from all along the coastline, representatives of the Save Our Coast Group and Surfrider Foundation Australia, and dozens of concerned residents, that PEP11 had the potential to wreak havoc along the entire coastline from Sydney to Port Stephens.

Not only would any drilling impact the way of life on the Central Coast, but it would also have an economic effect on the fishing industry and tourism, which he said was a “vital employer” on the Coast.

“(Drilling) would be a disaster, even if things went well, but if they didn’t, it could be potentially catastrophic,” he said.

Albanese said the Labor Party was not opposed to oil and gas exploration in appropriate areas, but drilling along the coastline was “just not on”.

He said the Federal Government needed to ensure that an application for renewal of the licence was denied.

McBride said renewing the licence would pose a huge threat to the Coast’s environment, economy and very way of life.

“Critically, this decision won’t be made locally, it won’t be made on the Central Coast, it will be made by two Ministers who don’t live in the area, the Federal Minister for Resources, Water and Northern Australia, Keith Kitt, and the NSW Deputy Premier, John Barilaro,” she said in Parliament on February 2.

“Nearly 2,000 local people have already contacted me, calling on the Ministers to stop PEP11 and to save our coast.

“It’s not just locals who will be impacted by PEP11,” McBride said.

“In 2019, 1.94 million people visited the Coast, adding $692M to our local economy, and in the pandemic recovery, tourism should be boosted, not threatened by risky proposals like PEP11.”

Conroy said PEP 11 should be stopped because it was the wrong project in the wrong place.

“It makes no sense from an economic, environmental, and energy perspective,” he said.

He said drilling would jeopardise thousands of local jobs in tourism, recreational and commercial fishing.

“If there was an accident, this would have a devastating environmental impact, including on the marine life in the area,” he said.

“And while NSW does need to produce more gas in the short to medium term, there are already projects under development that will produce gas more cheaply and in less sensitive environments without endangering existing industries.”

Save our Coast representative, Tim Heffernan, said that the Federal Government must now act to cancel PEP11, which “doesn’t make any sense”, once and for all.

“Save Our Coast has been leading the campaign with the community for a number of years to stop seismic testing and drilling off the most populated coastline in NSW, which is also a major whale migratory route,” he said.

“Tens of thousands of people from the Central Coast and beyond have joined actions, signed petitions and contacted their local MPs.

“We are opposed to the project because the risk to our precious marine environment, tourism sector and coastal lifestyle far outweighs any benefits, especially in a time when the entire world is moving away from fossil fuels and transitioning toward renewables.”

Surfrider Foundation Australia National Campaign Director, Damien Cole, said while gas exploration was the main thrust of PEP11, there was also the potential for oil exploration.

“This could lead to oil slicks which could destroy everything we’ve ever known” he said.

After months of refusing to make a public stand on the issue, Member for Robertson, Lucy Wicks, announced on February 5 that she would oppose extension of the PEP11 licence.

“Extending the PEP-11 permit is a decision for the Joint Authority,” she said.

“The first step in this process is for the NSW Deputy Premier, John Barilaro, to make a recommendation on extending the PEP-11 permit.

“The second step is for the Federal Minister for Resources, Keith Pitt, to do the same.

“I am urging the NSW Government to listen to the concerns of the Central Coast community and say no to extending the PEP-11 permit.

“I stand with my community in raising these serious concerns about the potential impacts of PEP-11 on our ocean.

“Regardless of the NSW Government’s decision, I will be advocating for the Commonwealth to say no to the decision to extend the PEP-11 permit.

“As the Member for Robertson, and a passionate member of the Central Coast community, I will not support anything that could harm our waterways and precious marine life.”