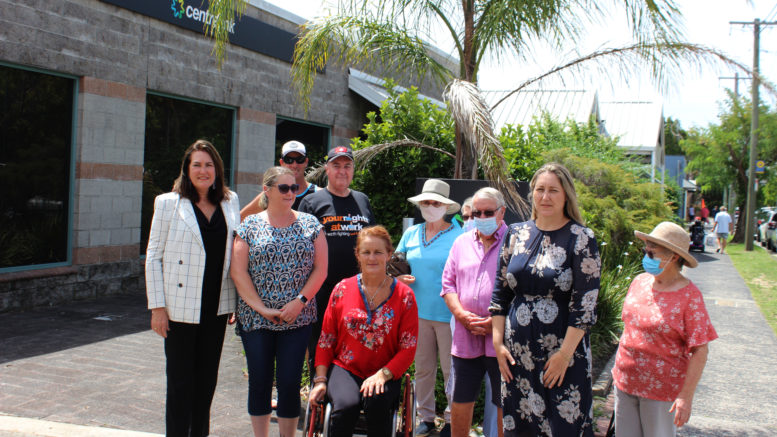 A small group of residents gathered outside the Ettalong Centrelink on February 12 as it prepared to close its doors for the last time.

Joining them in protesting the closure were Central Coast-based Senator Deborah O’Neill and Member for Gosford Liesl Tesch, along with Federal Member for the neighbouring electorate of Dobell, Emma McBride.

O’Neill described the closure as a “case of neglect” by the Federal Government and Member for Robertson, Lucy Wicks.

“Last year we saw lines at Centrelinks snake around blocks and Prime Minister Scott Morrison said,‘Oh no, I (had) better do something’,” O’Neill said.

“Many Australians were smashed by the overnight closures of businesses and came to Centrelink because they needed support.”

O’Neill said the closure of the Ettalong centre came just over a month before small businesses face a “cliff” when JobKeeper payments cease at the end of March, with Centrelink queues sure to escalate as a result.

With the announcement of the shutdown coming just two weeks before the closure, residents were given little warning, with many still unaware of the change.

Local Cathy Soder said the decision to leave Peninsula residents with no other option besides the Woy Woy Centre was “disgusting”.

“You look at how many people use the Ettalong facility, the demographics of it … these are the people who need an accessible service the most,” Soder said.

“Elderly people and people with disability will struggle to visit the Woy Woy centre – they don’t always have the ability to use technology; they might not be able to get to public transport services.

“The decision shows a lack of regard for the community [and] it’s not good enough.

“Alternate premises at Ettalong should have been organised and now be ready and fully operational.”

A social media post by Member for Gosford Liesl Tesch about the closure garnered a significant response from outraged locals, with many calling on the Federal Government to reinstate the branch.

Other residents noted the lack of parking availability at the other service centres on the Coast, including Woy Woy, which users will now have to travel to.

Ettalong resident Kelly Jeans said she was very disappointed by the decision.

“My mum worked at this Centrelink office when it first opened many years ago and she now relies on it as well,” Jeans said.

“A lot of the older generation in Ettalong rely on that face-to face assistance [here], they don’t have the technology at home.

“To take away an office that they need and force them to go to Woy Woy means they will be standing in line longer … it’s going to put more pressure on the Woy Woy staff.”

Federal Member for Robertson, Lucy Wicks, said the first stage to establish a Services Australia Agent in Ettalong is complete, with Expressions of Interest closing as of late last week.

“In the meantime, residents in Ettalong can continue to access the new-era Services Australia service centre in Woy Woy, which is completing its transformation, focusing on upgrading service offerings for residents.

“The development approval for the site where the Ettalong Service Centre was located is well understood by the local community.