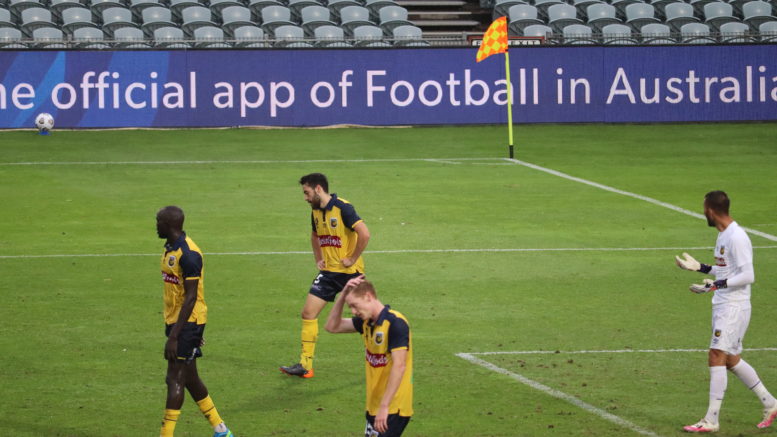 The A-League perpetuated a legacy of VAR-driven results and rewarded dives in a farcical game between the Central Coast Mariners and Adelaide United at Hindmarsh Stadium.

After being dominated by the Mariners throughout much of the game, Adelaide was gifted a 3-2 win despite having just one clear shot on goal in the whole match.

All three Adelaide goals were penalties.

The first two came from what appeared to be dives by United players, while the third came via an intervention by the VAR for a hand ball in the 80th minute after a United player struck the ball into Kye Rowles at point blank range inside the box.

At the time, the Mariners were about to take a free kick of their own at the other end of the field after Kuol was deliberately fouled in front of goal.

The loss brings the Mariners’ three game winning streak to an end.

Despite their poor form this year, Adelaide went into the game having lost only one of their last 10 A-League games against the Mariners.

For Mariners defender, Jack Clisby, the game also had special significance, being his 150th game for the Central Coast.

In the 15th minute, the lead came to the Mariners off the back of a defensive mishap by Jordan Elsey with a soft back pass to the keeper that gifted Daniel De Silva a one-on-one single touch shot at goal.

Delianov tried desperately to close the space, but the sleight, outside-foot touch by De Silva spun the ball on its axis and curled it slowly into the net.

The next big game moment came in the 32nd minute, with a penalty against Mariners defender, Ruon Tongyik after an apparent dive an Adelaide player.

The penalty was upheld after a VAR check.

Adelaide’s Tomi Juric stood up to do the damage and slid the ball into the bottom corner.

The Mariners had two more shots on goal prior to half time, including one near miss by Mariners captain, Oliver Bozanic.

The second half continued in similar fashion with Adelaide growing in confidence but most of the chances at goal coming from the Mariners.

A yellow card for Stefan Nigro in the 62nd minute was immediately preceded by the Mariners scoring their second goal.

It was a goal no ordinary human being had a right to score.

But super-sub Kuol is no ordinary human being.

After Matt Simon caught the hosts napping and fired a throw-in to Kuol advancing into the box, the star striker was immediately challenged by Elsey on his inside, with Delianov looking to have the narrow goal opening well and truly covered.

But the magic right boot of Kuol curled the ball around Elsey, past the glove of Delianov, grazed the inside of the post and nestled it safely into the back of the net.

The goal brought Kuol back to the top of the goal scoring tally this season with six.

The host’s rallied however and it was Adelaide captain Stefan Mauk who earning United’s second penalty, once again seeming to have come down without contact in the box.

Once again, the VAR bizarrely upheld the decision, suggesting the players’ arms had momentarily crossed.

Juric then made the Mariners pay, sending Birighitti the wrong way before netting the ball in the back right corner.

In the 78th minute, a kerfuffle of swinging legs (and arms as it turns out) was seen in the Mariners’ defensive box as Adelaide peppered the goal.

Upon clearing the ball, Kuol broke free at the other end, ending in a free kick after a reckless challenge by United’s George Timotheou.

But the visitors didn’t get a chance to capitalise.

For the third time, and some two minutes after the event, the VAR check resulted in Adelaide being awarded their third penalty back at the other end of the field.

The video showed the ball catching Kye Rowles’ hand at point blank range off a strike by Paciifique Niyongabire.

International football rules state that, even if a handball is not deliberate, it is still a penalty if the player has raised their arm to make their “playing silhouette” larger.

The rules also say however, that if a player is falling and the ball touches their hand/arm but it has not been extended to make their silhouette larger, it is not an offence.

While angles can be deceptive, slow motion replays suggest Rowles hand was in front of his own face.

For the third time, Juric found the back of the net to give Adelaide their first lead of the night with five minutes left.

Deep in penalty time, the Mariners created a final opportunity to equalise with a missed header by Bozanic directly in front.

Even keeper Birighittileft his goal to join his team-mates in attack for the final minute, but to no avail.

Referee, Daniel Elder, signed off his night by awarding a red card to Kye Rowles for some ill-conceived words after the whistle.

The Mariners were left bemused after another high-quality performance.

Rowles will miss the Mariners’ next match against Perth Glory, scheduled at HBF Park on Tuesday, 2nd March.

The Mariners deafened by The Roar