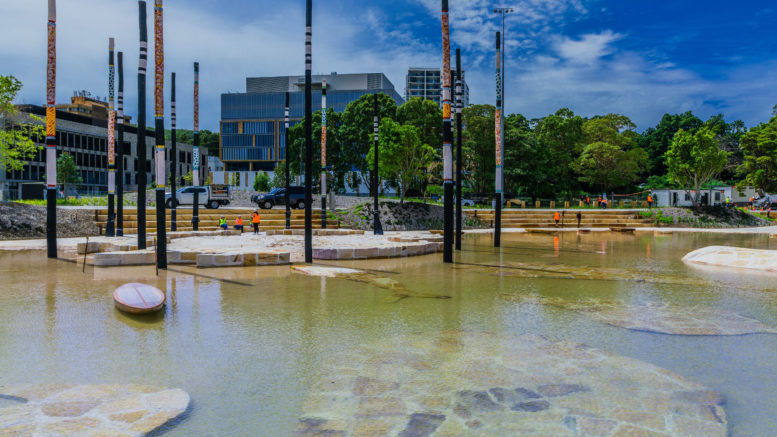 Two years after the project was first announced and following a construction phase of more than 12 months, the revamped Leagues Club Park in Gosford is set to officially open on February 27.

Anticipation of the “world class public space” has been steadily mounting since it was first mooted in February 2019, by then Planning Minister, Anthony Roberts.

Plans were reinforced in August of that year by Roberts’ successor, Rob Stokes, as Hunter and Central Coast Development Corporation (HCCDC) named Landscape Solutions as the construction contractor.

Construction started in November of that year and now the State Government’s $10M transformation is in its final stages of completion, with the community invited to open the playspace on Saturday, 27 February.

Parliamentary Secretary for the Central Coast and Member for Terrigal, Adam Crouch, said that – much like Leagues Club Park itself – the community event would showcase the region, its people and its history.

“The construction of Leagues Club Park has been underway for the past 12 months, right through the COVID-19 pandemic, and in just a week’s time, this exciting playspace will be open and accessible to everyone,” Crouch said.

“The last 12 months has demonstrated the importance of open public space and to be able to deliver more than 20,000 square metres of it in the centre of the Central Coast’s capital is a fantastic result for our region.”

“This event will also be an opportunity to learn about our region’s culture and history, with performances and workshops by members of the local Aboriginal community and a discovery trail that leads participants through a tour of the park’s significant features,” Crouch said.

The finishing touches are now underway at the site, with the remaining plants going in, play equipment undergoing final safety checks and the tidal terrace being put through its paces in a variety of weather conditions.

The free community event at Leagues Club Park will be held from 10am-4pm on Saturday, February 27.