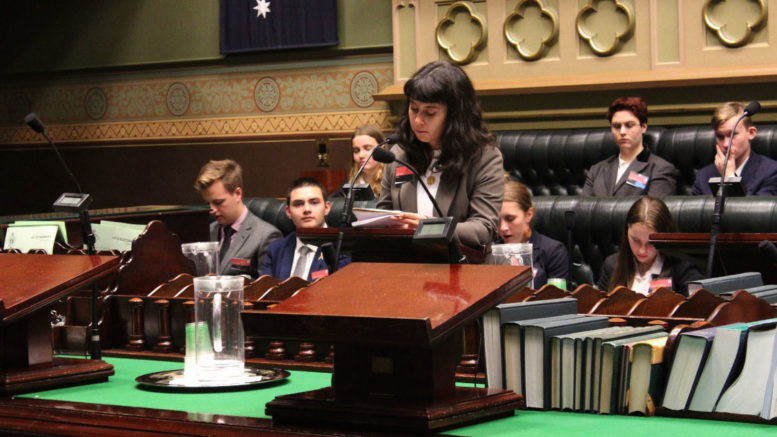 Those in Years 10, 11, 12, or of the equivalent age, can apply to the program which consists of a four-day training camp where participants are split into committees to develop policy positions ahead of a day of debate on the floor of NSW Parliament.

Following the event, passed bills are formally presented to the NSW Government.

Ella Avni of Copacabana was a Y NSW Youth Parliament representative in 2019 while she was in Year 11 at Kincumber High School.

She said her decision to recently enrol in a Bachelor of Arts/Bachelor of Advanced Studies (Politics and International Relations) at the University of Sydney was influenced by her time in the program.

“It really was the start for me getting into politics,” Avni said.

“After that, I met my friend Abby at Youth Parliament, and she got me into the group, School Strike 4 Climate.

“I did a lot of advocacy with them for a while.

“I think it really improved my political engagement, not only on the Central Coast but statewide as well; it was like a gateway to everything else.”

Since its beginning in 2002, approximately six Y NSW Youth Parliament youth legislations have been passed into NSW law, including the recent Domestic Violence Disclosure Scheme.

“e first camp (training) was really good for learning how state parliament worked, what the processes are, and they taught us all about writing bills,” Avni said.

“We had a schedule that each day we would debate a few different bills.

“I was on the Women’s Affairs committee, so we wrote our bill about equal access to sanitary products for homeless women.

“The residential camp was really amazing for me as I learnt how to improve my public speaking.

“I noticed my confidence shot up so much after that camp.

“It was a really good environment, and everyone was so accepting and everyone is there to improve themselves.”

Avni said her interest in politics has come from wanting to have a voice in her community.

“I saw an ad on Facebook for Youth Parliament, and I thought it would be an awesome opportunity to have a voice in my community and on what goes on in politics,” Avni said.

“Because it affects us the younger generation and we don’t have much of a voice, I thought it would be a really good chance to get my voice out there and have a say.”

The Y NSW is seeking representatives from all 93 NSW State Electorates to participate.

Y NSW CEO, Susannah Le Bron, said it was exciting to be back following the program’s suspension in 2020 due to the pandemic.

“There’s never been a more important time for young people to stand up and be heard, and the Y is incredibly proud as an organisation to bring these voices directly to the seat of power in NSW.”

Applications are open now and will close on March 12 at 5 pm.

For more information, or to apply, visit: www.ymcansw.org.au/community-services/youth/youth-parliament/.