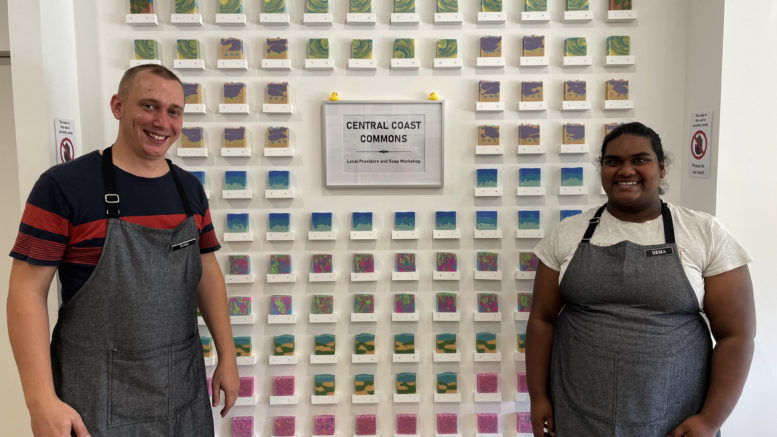 As tourists flock to the Central Coast, more and more people are bringing Gosford to life by moving their businesses to the CBD.

Local providore and soap shop, Central Coast Commons, is one of them, only recently opening its doors to sell a range of locally sourced goods from more than a dozen local suppliers.

Business owners Tom and Hema Urban said they wanted their business to be not just a shop, but an experience.

“A lot of tourists go to places and pick up things such as magnets, so one thing we wanted to do was showcase some products manufactured in the Coast and bring them together into one place because I didn’t think there was anywhere you could do that,” Tom Urban said.

“What I wanted to do was to be more than a store, I want to offer people something they could watch, ask questions about, and participate in through workshops.

“So soap making seem to fit the bill and be a little bit different.”

Urban said they would eventually consider expanding to markets.

“Specifically throughout COVID, a lot of these products were just sold at markets, so you had to track down the owner,” he said.

“I think a lot of our suppliers were happy to have somewhere that sells them permanently.”

Other than soap, you can purchase anything from candles to creams, nougat and necklaces.

Urban works in tourism, and wife Hema works for a scientific journal, and the pair moved to the Central Coast over two years ago.

“It has always been a bit of a dream of mine to own a business in the tourism space,” Urban said.

“We had seen Gosford start to, I guess, gentrify a little bit, with lots of funky new cafes and restaurants opening; we really liked that.

“We wanted to create a business that showcased a bit of the Central Coast and things that are made here, and also to offer an experience to businesses and locals.

“We did look around at a few different locations towards the southern end of the Central Coast, but we really liked Gosford and it just kind of fitted when we found a suitable property; it is easily accessible.

“We are really excited for the park to open as well.”

“We didn’t do any damage to anything as we worked with some chemicals,” he said.

“But some didn’t go quite right, so we have a few boxes at home of soaps that just haven’t worked out; it’ll last us a lifetime.”