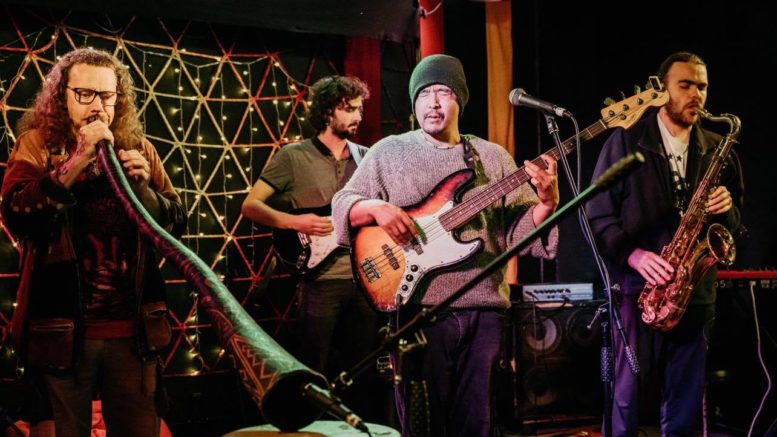 Music at the Rhythm Hut is back in full swing with the venue lining up performances from various local, national, and international acts over the next few months.

On Sunday, January 31, the 5 Lands band will be hitting the stage, joined by venue owner, Rendra Freestone.

Freestone said the music collective used to play at the Skillion in Terrigal for the finale performance of the award-winning 5 lands walk.

“It was like jazz-funk world journey music,” Freestone said.

“These days, it’s some of the hottest musos from Sydney, Central Coast, and Newcastle coming together monthly to make magic in one of the cosiest family-friendly venues on the Coast.”

On Saturday, February 6, the venue will be hosting the reggae, multi-instrumentalist, singer-songwriter, Afro Moses.

Originally from Ghana, Afro Moses became popular when he was a teenager, producing number one songs which have a blend of Afrobeats, reggae, funk, jazz, raga, salsa, percussion, traditional African drums, and vocals.

He was given the nickname “The African James Brown” for his funky music and dance style which was popular at the time.

Soon after he rose to fame in Ghana, Afro Moses was noticed by one of Bob Marley’s tour managers, and he has been touring the world ever since.

“We’re so excited to still be welcoming acts of this international calibre to grace our stage after so much uncertainty in recent times due to COVID,” Freestone said.

“Afro Moses, one of the most-high energy performers coming out of Ghana, West Africa, will be paying respect to reggae legend Bob Marley to commemorate his birth.”