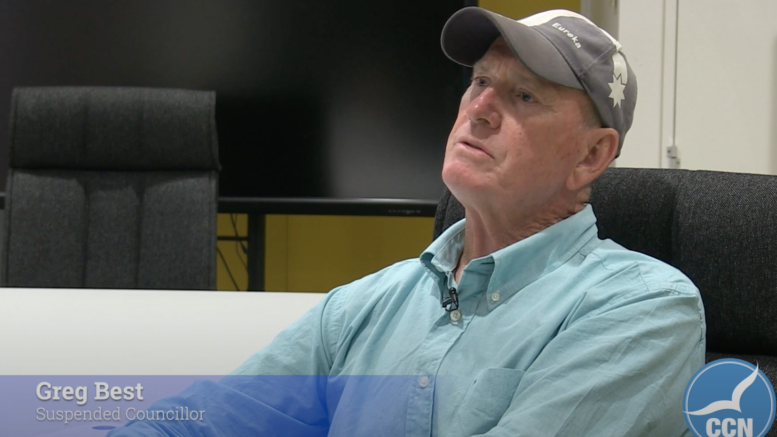 Suspended Central Coast Independent Councillor Greg Best says the least Council should do if reinstated on April 29 is to show some contrition and unanimously vote for a public apology for the “$565M financial train wreck” it is responsible for.

“I make no apology for whistleblowing on this debacle and given the chance I would do it again,” he said.

“My open letter (to Local government Minister Shelley Hancock) of September 2020, triggered the then CEO Gary Murphy to report the true financial situation, which ultimately led to the Minister suspending the Council on October 30 and appointing Dick Persson as Administrator.”

Best said Persson was clearly the person in the hot seat, a man of action with a strong track record for his efforts in bringing together the Northern Beaches Council.

“I empathise with Mr Persson and Acting CEO Rik Hart for their efforts as I too, have sought to improve the financial management of this Council and called on councillors to stop spending like drunken sailors.

“Whilst I do not fully agree with the Administrator’s path of austerity, I soberly remind the community that these men are desperately seeking to assist us in a very bad situation.

“At the end of the day, they are only here because of the total financial incompetence of the Council.

“Council suggesting that it did not know of the looming financial disaster after voting for the past three years for budget losses, now eclipsing $232M, is a disgrace and there should be more than an apology, there should be an investigation.”

Best said he had put 85 motions to the Council since its election in 2017 following the amalgamation of the former Gosford and Wyong Councils, many of them relating to financial concerns.

“However, most of them were trivialised, and voted down along party lines,” he said.

As an Independent, Best said political division had to be one of the major failings of the Council.

He said of his 25 years representing his community, the past three years following the amalgamation were by far the most difficult.

“The Amalgamation, managed well, should have delivered us significant savings through efficiencies of scale,” he said.

“We had the opportunity to become one of the most powerful regional councils in the state, not unlike the Hunter, and this has been squandered by political infighting.”

Best said education was the best tool in preparing elected councillors for their term in office.

“We need to bring people together early in the Council term and bring them up to speed with all of the Council speak and acronyms, knowledge them up around the idiosyncrasies that is Council,” he said.

“I think the Councillors will return on April 29h – that’s in keeping with the Local Government Act – and I will seek to move for an unconditional apology to our ratepayers and for Council to engage in an independent investigation into the loss of $232M of its money.

“No stone should be left unturned; this money did not just disappear.”

Best said one of the major issues on which he was constantly shouted down was the proposed Cultural Centre in Gosford, which was to have incorporated a performing arts centre and a regional library.

“It had no serious business plan, no anchor tenants and it was a sea of debt with Council looking to borrow a further $100M to commence construction.”

The project was eventually abandoned with multi-million dollar design and planning losses as Council instead decided to proceed with planning a Regional Library, which Best thinks will never see the light of day.

“Clearly the elephant in the room is the blowout of our middle bureaucracy with staffing levels somewhere between 500 and 700 above what we needed,” Best said.

“This has cost the ratepayers $50-70M a year over the past three years with wages now eclipsing some $200M per annum.”

The proposed 10-15 per cent rate rise was not a satisfactory solution to the Council’s financial woes, he said.

“Ratepayers simply cannot afford to be slugged even harder,” he said.

Best urged residents and ratepayers to vote politics out of Council at the September 4 local government elections.”