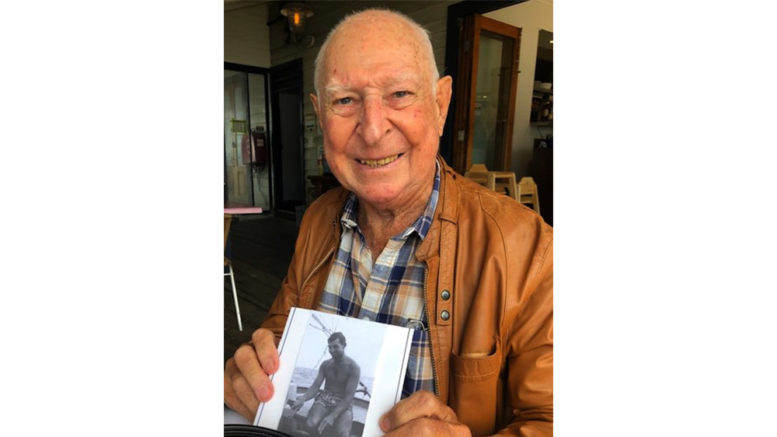 Burgess holding a picture of him sailing in Indonesian waters

An Ettalong author has described his experience growing up in post-war, country New Zealand in a novel released earlier this month.

John Burgess’s memoir entitled Life, Luck and Liaisons details his childhood, schooling stories and farming and sailing adventures in the form of letters.

Burgess said his book is reminiscent of Barry Crump’s A Good Keen Man and said readers will be able to relate to the difficulties of father-son relationships.

“I relate my experiences at a leading private boarding school exposing a hierarchical cult that is no longer encouraged in those institutions but that many at the time were familiar with but were too afraid to divulge,” Burgess said.

“Hopefully, readers will also enjoy the tales of my sea heritage and ocean sailing on American yachts.”

Burgess grew up in country New Zealand during the 1950s and began to work in livestock management on a cropping farm in the country’s Southland.

After applying for a year-long correspondence course with the London School of Journalism, Burgess presented his first freelance efforts to The Herald’s supplementary paper, The Weekly News.

He was then encouraged to submit a weekly article based on his rural experiences, before leaving New Zealand to board a yacht, swapping farming stories for tales of travelling.

Along his sailing adventures through the Pacific and Indonesian waters, Burgess wrote detailed letters to his parents.

The former journalist said his mother saved the letters and returned them years later, inspiring him to write the novel.

“I unexpectedly received a parcel that contained letters that I had written to my parents from my boarding school days onwards,” Burgess said.

“I took this as an omen and decided to set down my memoirs, originally thinking they might be of interest to my grandchildren.”

And now several years and 1500 pages of data later, Burgess has collated his tales and old newspaper articles to form the novel, published by Xlibris AU.

Burgess said he would like readers to take away the positives of opportunity from his novel.

“We should be ready to make the most of opportunities that come our way,” he said.

“There may be setbacks along the way, but if we believe in ourselves, we can enhance our own personal growth.”

Burgess now resides at Ettalong Beach with his wife Jenny.

Life, Luck and Liaisons is available online at Amazon and Barnes & Noble.