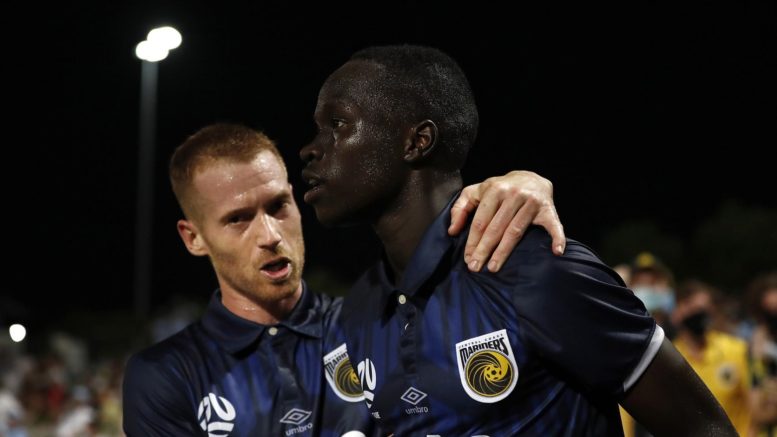 The Mariners were too good for Sydney FC. Image: CCM media

An upset win for the Central Coast Mariners away from home against Sydney FC on Friday, January 22 has sky-rocketed them back to the top of the A-League.

Despite the Mariner’s early run of good form, they headed into the oldest rivalry in the A-League with the weight of history against them, with Sydney having won all but one of their last 17 games.

Nonetheless, the blue and yellow took charge of the match and suppressed their hosts throughout the first half, maintaining their more disciplined defensive structure of the 2021 season.

At times, it came down again to the secure handling of Mark Birighitti in goal, who made five crucial saves in the first half alone, one at point blank range in the 14th minute.

The first big chance for the Mariners came in the 43rd minute from a Danny De Silva free kick that ended in a stunning bicycle kick from debutante Daniel Bouman.

Neither was too much for Sydney keeper, Andrew Redmayne, on that occasion.

But that changed in the 54th minute with a combination of good fortune and strong pressure after a break by Bouman and a carefully crafted cross in search of Matt Simon instead found a loose foot of Sydney defender Ben Warland which skewed it passed the gloves of Redmayne.

This marked a shift in the momentum of the game, with Sydney unable to get a shot on goal.

In the 75th minute, the challenge for the hosts doubled when Alou Kuol scored his second goal of the season.

It started in the back line off an aggressive defensive move by Ruon Tongyik who fed Josh Nisbet into space.

A one-two move between Nisbet and Jordan Smylie was thwarted by the Sydney defensive line, but they were unable to clear the ball further than Kuol who was lurking on the edge of the penalty area.

The number 29 side-footed the ball into the bottom right hand corner of the goal.

Kuol went looking for another goal a few minutes later with a dazzling 70m run against a Sydney team forced into pressing higher up the field, but he couldn’t get it past Redmayne.

The game opened up with Sydney launching long, hopeful balls into threatening areas, forcing a number of saves and corners out of the Mariners defence, but they were unable to crack the code.

The win sent the Mariners back to the top of the table with a two-point lead over the second place Western Sydney Wanderers, although both Brisbane Roar and Melbourne City have a game in hand.

Regardless of this, a healthy 5-1 goal ratio for the Mariners has earned them the highest goal difference at this stage of the season.

Last year’s player of the season, Mark Birighitti now has three clean sheets in four games while the suffocating defence of Tongyik and Kye Rowles has been noticed across the League.

Changes have been made to upcoming fixtures in line with amendments made to match weeks five through nine of the A-League.

Following Friday’s clash with Sydney, the Mariners next game will still be against Wellington Phoenix at Central Coast Stadium on Sunday, 31st January, but the team will then stay at home to face Melbourne City on Wednesday, 3rd February at the same venue.

The following weekend they will host Western United at Central Coast Stadium in match week seven, with two away matches then following against Wellington Phoenix in Wollongong and Adelaide United at Coopers Stadium.

The scheduled clash with Macarthur FC on Monday, 22nd February has been postponed.

After four wooden spoons in five year, do we dare to believe?

Too little, too late from Mariners