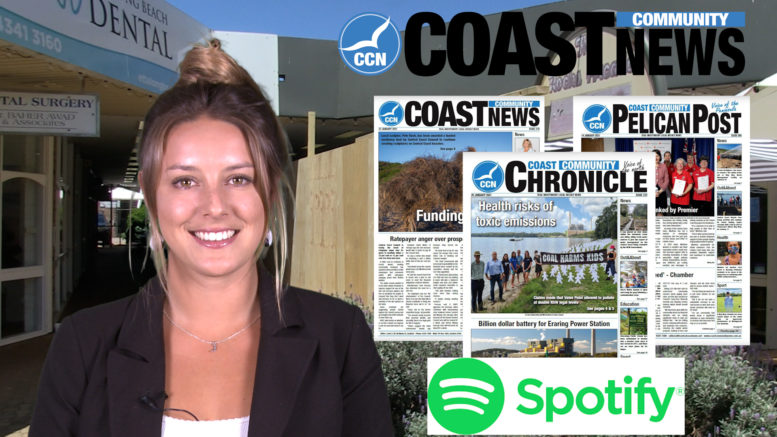 Hi I am Jacinta and this is Coast Community News 5@5 January 22 thanks for tuning in.

Coming up; Acting Council CEO Ric Hart speaks out Council crisis, the Coastal Twist has been accepted into the Mardi Gras again, mask controversy, air pollution scares at Vales Point Power station, a wall has been erected at Ettalong, and it’s a big market weekend across the coast.

Yes thanks JC, the Central Coast Council is facing the brunt of ratepayer anger over its plans to institute either a 10 per cent or 15 per cent rate rise from the next financial year. A survey was sent out asking people to choose between the two, but after IPART received a record number of complaints, a new survey from today now includes a base rate scenario option. Coast Community News attempted to complete the survey but whilst there was a base rate scenario option in question 8, you cannot submit the survey unless you choose between the original two options in question 7. Hmm interesting.

Early this week we interviewed Council’s acting CEO Ric Hart and this is what he had to say about the measures being put in place to restore the council’s ailing budget.

Earlier in the week, the local environmental group, Future Sooner, and the Nature Conservation Council of NSW placed hundreds of child silhouettes along the foreshore in front of Vales Point Power Station to visualise the impact of the number of children they claim are affected by asthma due to emissions. Nature Conservation Council Dr Brad Smith gave us the background of the protest.

MASKS
With masks now being mandatory in indoor settings, an altercation at Bateau Bay between a woman and a Tuggerah Lakes police officer has reached international news. When speaking with us, Tuggerah Lakes Chief Inspector, Cole Lott, defended the officers position in demanding to see ID, stating that under the NSW health act, “if police form the opinion that the person is not being honest and is committing an offence, the police have the power to demand the name and address of that person.” Local Lachlan Ainesworth has one of these exemptions and he told us about his experience.

MYSTERY WALL OF ETTALONG
A 3-metre high timber wall has been erected in the front of a popular set of shops in Ettalong this week and local business owners are perplexed by the sudden action. We reached out to agent Helen Hughes who supported the rights of the owner to erect the wall. We spoke with some of the business owners affected.

In Central Coast Cricket, two of the First Grade T20 Quarter Finals went ahead on Thursday, ending in wins for the Warnervale Wildcats and Terrigal Matcham Bellbirds.

At Baker Park, the Wildcats took it away, overcoming their hosts the Wyong Roos’ score of 109 in the 15th over.

Meanwhile at Bill Sohier Park, a nail biting contest went down to the very last bowl with Lisarow Ourimbah losing their final wicket with only 4 runs needed to win.

In the A-League, the Central Coast Mariners’ winning streak was brought to an end with a 1-0 defeat by the Western Sydney Wanderers at the Central Coast Stadium on Tuesday evening. The winning goal came late in the 83rd minute of the game after a loose ricochet in the penalty area saw the ball drop at the feet of Nicolai Muller, who put the ball over an over-stretched Birighitti in goal.The result has pushed the Wanderers to the top of the league table with the Mariners now sitting at fourth beneath an equally pointed Brisbane Roar, with a game in hand on the two top teams. However, tonight they have the opportunity to shoot back up to the top when they play Sydney FC at Netstrata Jubilee Stadium, as will their hosts who are currently sitting at sixth. Kick-off is 7:05pm. Now let’s go to Hayley for the Weather.
HAYLEY

Thanks Haak, Saturday will be a sunny day with a max of 31, and light winds becoming easterly 15 to 25 km/h in the early afternoon then tending northeasterly in the evening.

All of these stories and thousands more are available on our website and don’t forget to pick up a copy of this week’s Coast Community News, Coast Community Chronicle and Pelican Post. Subscribe to all of our social pipes to stay updated during the week. AND we are now available on spotify as a podcast. Simply search Central Coast News on Spotify to subscribe.
MARDI GRAS
Finishing on a colourful note Naughty Noodle Fun Haus’s Coastal Twist festival has been accepted into this year’s Mardi Gras on March 6, which for the first time in its 43-year history, will be held at the Sydney Cricket Ground. Workshops are currently underway to create a series of ‘deep-sea’ themed costumes. We spoke with both Juan and Glitta about the event. Thank you for joining us, see you next week.