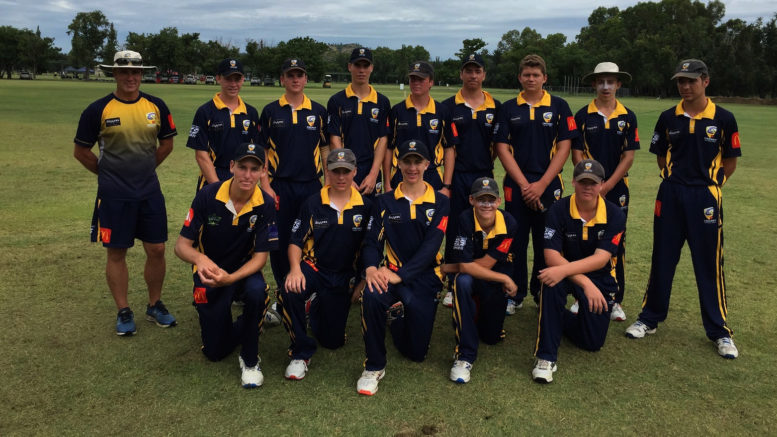 The Central Coast Colts ended their McDonalds Country Cricket NSW Carnival in Tamworth with a hard-fought win over North Coastal on Wednesday (Jan 6).

Winning the toss for the third time, the Colts invited North Coastal into bat and Terrigal Matcham’s Nick Toohey got the team off to a great start with two early wickets.

North Coastal managed to find some momentum making it to 4/134 before being undone by the Coast’s spin bowling duo of captain Harrison Townsend of Wyong and Karan Katli of Warnervale.

The pair combined to take 5/60 from their 20 overs to see North Coastal dismissed for 168.

For the third consecutive day the Central Coast lost an early wicket with Warnervale’s Ben Sammut going for only 5 runs.

However, Narara Wyoming’s Tom Owen and Terrigal Matcham’s Austin Haba consolidated the innings with a 58 run partnership before Owen was dismissed for 23.

Tex Parry of Lisarow Ourimbah joined Haba and took the score to 89, but a flurry of wickets by North Coastal had them teetering precariously at 6/100.

With the team still needing 27 runs, Nick Toohey and Warnervale’s Hunter Jackson-Sullivan joined forces and slowly edged there way to the total over the course of 53 balls.

The victory was just reward for the side who recorded two wins with the only loss being to Newcastle in the reduced over match.

Separately, it was a disappointing finish for the U16 Bradman Cup side with a narrow ten run loss to North Coastal.

Taking to the field first, a quick start by Lisarow Ourimbah’s Daniel Thompson (2/34) and Terrigal Matcham’s Campbell Crossfield (3/32) helped move through the North Coastal top order and had them struggling at 7/55.

However, the Central Coast were unable to finish the job, with some excellent rear guard batting from North Coastal seeing them reach a very competitive 172.

Tom Noble of Lisarow Ourimbah picked up the final two wickets on his way to 3/25 with Northern Power’s Finn Newell and Brisbane Water’s Lachie Shedden also taking a wicket.

But a lack of mid-order saw them dismantled in the 49th over for 162.

Jett Mason starred for North Coastal taking 5/29 off his 10 overs.

The Bradman Cup side finished the carnival with one win from their three games with North Coastal becoming the winners.