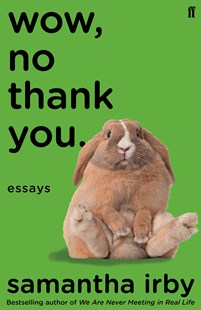 Wow, No Thank You

“I have been stuck with a smelly, actively decaying body that I never asked for,” Irby writes, “and am constantly on the receiving end of confusing, overwhelming messages for how to properly care for and feed it.”

There’s a little taste of Wow, No Thank You.

This title came to my attention when I was Googling best books of 2020.

It showed up on a few different forums and seemed to get solid reviews, so purchased a copy.

Sometimes I think I live under a rock … or I am middle aged … or are they basically the same thing.

Wow, No Thank You is a collection of essays about Samantha’s life, growing up poor, suffering with Crohn’s disease, dating, moving from Chicago to the burbs with her wife, and turning 40.

Some essays are outrageously funny, some are embarrassingly cringeworthy and some parts were, well, just long.

Some chapters were more enjoyable than others, for instance I could completely relate to “a guide to simple home repairs”.

As someone who has lived in units for over 30 years, I find home ownership daunting.

As Samantha points out “Over the last couple years I have had to learn to live in a house, and that is one of the hardest and most boring things I’ve ever had to do. There’s a lot of basic shit I absolutely DO NOT KNOW as I uncomfortably mascaraed through life in the body of a human adult and the brain of one of the aliens from Earth Girls Are Easy.”

Then there is “body negativity” which goes from hair to skin to hands, feet and everything in between, to this Samantha says, “Loving yourself is a full-time job with shitty benefits. I’m calling in sick.”

There was a very long chapter where she describes her playlists, I mostly skipped it because I hadn’t heard of most of the artists because as Samantha says, “The closer I creep toward the precipice of forty, the more time I spend listening to the same songs I listened to in high school…” (and none of these were songs I listened to in high school).

If you are offended by bad language, I would give this book a miss. The F bomb is used a lot (a couple hundred times).

After reading this I found myself referring to my girlfriends as “bitches”.

And while some of them are, I was using it as a term of endearment.

And if things like diarrhea and disease offend, then I would also give this a miss.

I like a good toilet joke as much as the next person, but it did go on a little bit too much, but hey the bitch has digestive issues.

However, if quotes like, “After my shower, I use Neutrogena body oil, because you can get a giant bottle super cheap at Target and it smells like rich people. My shower smells like mould, but I ignore it!” make you laugh out loud like it does me, then add this to your reading list.